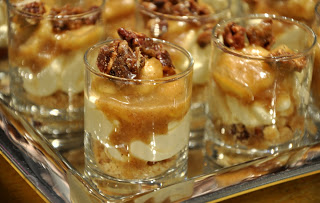 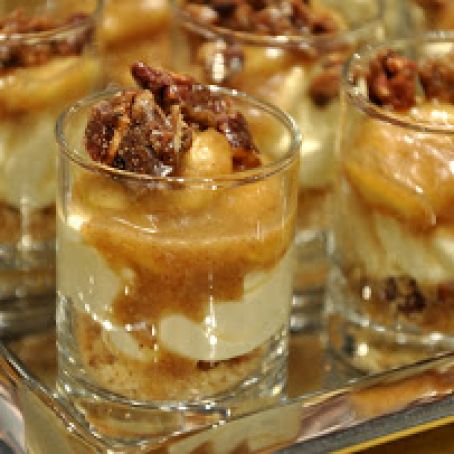 Grind the cookies in a food processor. In a bowl, combine the cookies with the melted butter. Spread the mixture onto a baking sheet and bake in a 400 degree oven for 10 minutes. Remove from the oven and toss the mixture with a wooden spoon.

In a mixer or bowl, whisk heavy cream until stiff. Fold in powdered sugar. Add sour cream. Add the packet of banana pudding and the cinnamon and vanilla. Spoon the mixture into a piping bag with a star tip or large Ziploc bag with the corner snipped off.

To make pecan brittle topping, heat two tablespoons sugar, pecans and a pinch of cinnamon in a small pan over medium-low heat. Watch carefully so the sugar does not burn. Stir the mixture until the sugar melts. Once it is melted and the pecans are evenly coated, spoon the mixture onto a piece of wax paper to cool. Once cool, gather the wax paper together, so the pecans are tucked inside, and squeeze the paper-wrapped pecans to break the brittle into smaller pieces.

Pour about ½ cup of caramel sauce into a Ziploc bag. Snip off a small tip of the corner. Next, slice the bananas into thin slices and set aside.

To assemble the cups, spoon approximately one teaspoon of the pecan crust into a shot glass or small bowl. Add 2-3 banana slices. Pipe the sour cream banana whipped cream pudding into the cup until it is about ¾ full. Drizzle caramel on top of the cream and garnish with the pecan brittle. Enjoy! 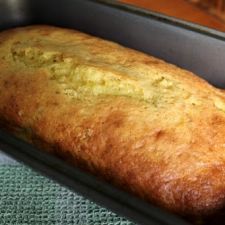