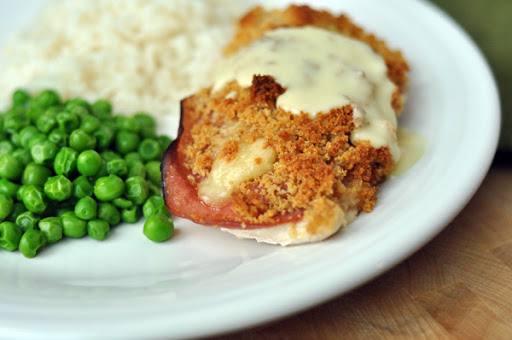 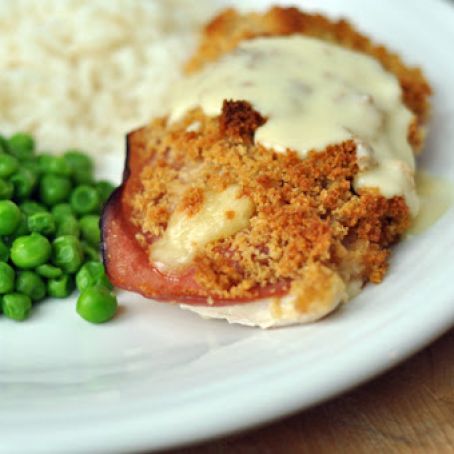 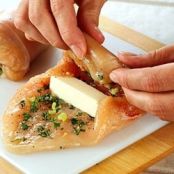 Lightly grease a 9X13-inch baking dish with cooking spray and preheat the oven to 350 degrees.
In a bowl, combine the bread crumbs and melted butter. Set aside.

Bake the chicken for 30-35 minutes, until the chicken is cooked through completely, the cheese is bubbling and the bread crumbs are golden.

While the chicken bakes, in a medium saucepan, melt the 2 tablespoons butter.
Stir in the flour, whisking constantly, while cooking the flour/butter mixture for 1-2 minutes.
Slowly pour in the milk while whisking quickly.
Stir in the chicken bouillon granules and salt.
Whisk constantly over medium heat until the mixture begins to simmer and thicken, about 3-5 minutes.
Once the sauce has bubbled and thickened, remove from heat and stir in the mustard, Worcestershire sauce and Parmesan cheese.
Stir until the cheese is melted. Keep the sauce warm until the chicken is finished baking.
Serve each chicken cordon bleu portion with warm sauce.

Make Ahead Instructions: Assemble the chicken, ham and cheese according to the recipe. Store the prepared bread crumb/butter mixture in a resealable plastic bag or other container. Cover the casserole with plastic wrap and store it and the bread crumb mixture in the refrigerator for 8-12 hours. When ready to bake, sprinkle the bread crumbs over the top and bake according to the recipe, adding anywhere from 5-15 extra minutes since it was refrigerated prior to baking. Make the sauce while the casserole bakes or make it ahead of time, let it cool, and store it covered in the refrigerator for 1-2 days, reheating over low heat and whisking to recombine before serving. 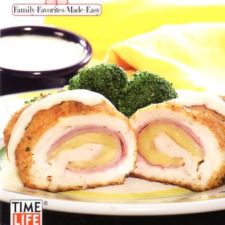