After one too many last-minute scrambles to get the gravy on the table at the same time as the turkey, we set out to make a lump-free, flavorful gravy recipe that could be make before the turkey even reached the oven. To achieve this, we roasted turkey parts and vegetables together, then simmered them to produce a quick stock. We thickened our Make-Ahead Turkey Gravy with a roux, but instead of the usual oil or butter, we used turkey fat that had congealed on top of the cooled turkey stock. This gave our gravy recipe even deeper turkey flavor. For more flavor, after roasting the turkey you can skim the drippings from the pan and add them to the gravy just before serving. It's best to discard the strong-tasting liver before using the giblets. This recipe makes enough to accompany a large turkey and still have plenty for leftovers. 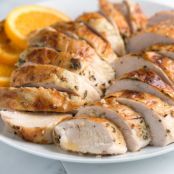 2. Transfer contents of roasting pan to Dutch oven. Add broth, wine, and thyme and bring to boil over high heat. Reduce heat to low and simmer until reduced by half, about 1 1/2 hours. Pour through fine-mesh strainer into large container (discard solids), cover stock with plastic wrap, and refrigerate until fat congeals, at least 2 hours.

3. Using soup spoon, skim fat and reserve. Heat 1/2 cup fat in Dutch oven over medium-high heat until bubbling. Whisk in flour and cook, whisking constantly, until honey colored, about 2 minutes. Gradually whisk in stock, bring to boil, reduce heat to medium-low, and simmer until slightly thickened, about 10 minutes. Season with salt and pepper. (Gravy can be refrigerated for up to 3 days or frozen for up to 2 months.) Reheat gravy in saucepan over medium heat until bubbling.