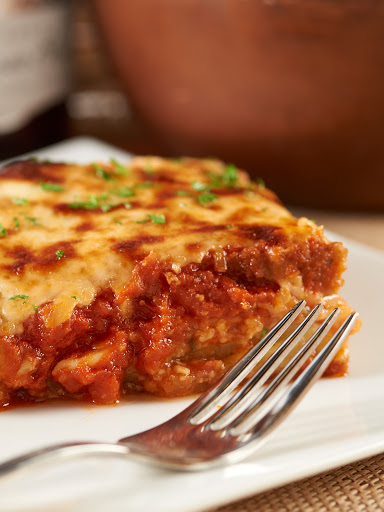 "I've never met a vegetarian dish I loved quite as much as this one. I always make a double batch and freeze a casserole for later."—David

Tip: Salt helps extract moisture from the eggplant, yielding a more flavorful (and less watery) dish. You can also layer the salt-coated eggplant in a colander and allow the moisture to drain out. Either way, just be sure to let the eggplant sit for at least 30 minutes. And, be sure to dry the eggplant thoroughly with paper towels before frying. 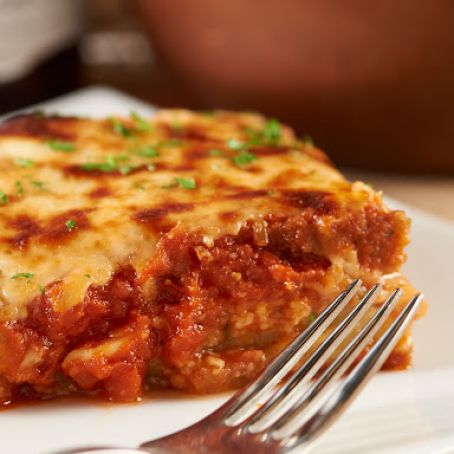 Preheat the oven to 350°F degrees.

Lay the eggplant slices out on a couple of cookie sheets. Sprinkle with 1 Tbsp salt. Let the eggplant sit for 30 minutes, and then blot the moisture from the eggplant with paper towels.

Combine the flour, remaining salt, and pepper in a medium-size bowl. Combine the bread crumbs and 1/2 cup of the Parmesan cheese in a separate bowl.

Heat about a quarter inch of oil in a large sauté pan on medium-high heat.

Take each slice of eggplant and coat it with flour, dredge it through the eggs, and coat again with bread crumbs. Working in batches, fry the eggplant until golden brown, about 1–2 minutes. Flip and brown the other side.

Layer 1 cup of the marinara on the bottom of a 9" x 13" casserole dish. Cover the sauce with a single layer of eggplant. Top the eggplant with 3/4 cup of marinara, 2 cups of Mozzarella, and 1/4 cup Parmesan cheese.

Create another layer with the remaining eggplant, sauce, Mozzarella, and Parmesan cheese. Bake for 40 minutes, or until golden brown and bubbly. 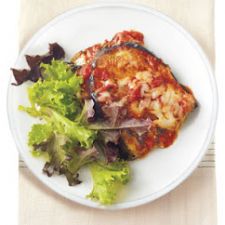 Eggplant Lasagna with Ricotta and Asiago