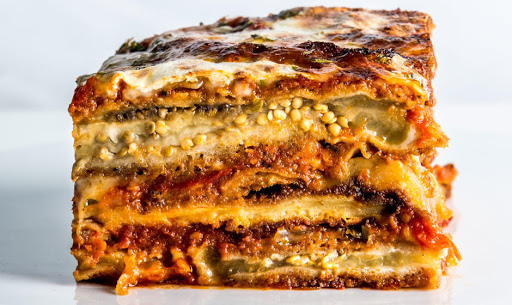 Trying to slice into this eggplant Parmesan while it's molten hot creates an oozy mess, so let it rest at room temperature for at least 30 minutes to firm up before serving. This is part of BA's Best, a collection of our essential recipes. 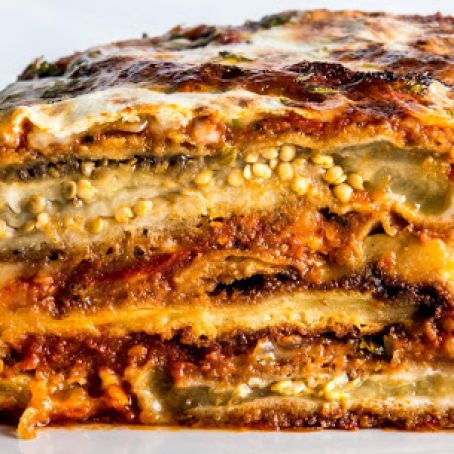 Add onion, anchovies (if using), and red pepper flakes and cook, stirring often, until onion is translucent, about 5 minutes.

Stir in tomato paste and cook, stirring often, until slightly darkened, about 2 minutes.

Add wine, bring to a boil, and cook until almost completely evaporated, about 1 minute.

Add tomatoes, breaking up with your hands, and their juices; add basil and oregano and stir to combine. Swirl 1½ cups water into one tomato can, then the other, to rinse, and add to pot; season with salt. Transfer pot to oven; roast sauce, stirring halfway through, until thick and tomatoes are browned on top and around edges of pot, 2–2½ hours.

Let sauce cool slightly. Pass through the large holes of a food mill or process in a food processor until mostly smooth. Taste and season with salt.

Do Ahead: Sauce can be made 2 days ahead. Cover and chill.

Preheat oven to 350°. Place flour in another shallow bowl and eggs in a third shallow bowl. Working one at a time, dredge eggplant slices in flour, then dip in egg, allowing excess to drip off. Coat in breadcrumbs, packing all around, then shaking off excess. Place on wire racks.

Heat ⅔ cup oil in a large skillet, preferably cast iron, over medium-high. Cook as many eggplant slices as will comfortably fit in pan, turning once, until deep golden, about 5 minutes. Transfer to paper towels and immediately press with more paper towel to absorb oil. Working in batches, repeat with remaining slices, adding remaining ⅔ cup oil and wiping out skillet as needed. Let cool. Taste and season with more salt if needed.

Remove from oven and arrange fresh mozzarella over eggplant. Increase oven temperature to 425° and bake, uncovered, until cheese is bubbling and browned in spots, 15–20 minutes longer. Let rest 30 minutes. Top with basil leaves just before slicing.

Do Ahead: Eggplant Parmesan can be made 2 days ahead. Let cool; cover with foil and chill. Reheat in a 350° oven, uncovering halfway through, until bubbling gently at edges.

Trying to slice into this eggplant Parmesan while it's molten hot creates an oozy mess, so let it rest at room temperature for at least 30 minutes to firm up before serving. 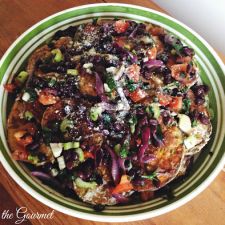