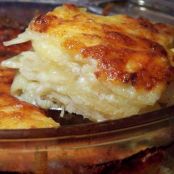 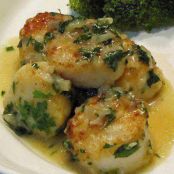 Toss scallops with 1T olive oil, lemon juice and salt and pepper. Heat pan over medium-high heat, add remaining olive oil. Once the pan is hot, sear scallops on both sides until golden brown, about 60 seconds on each side. Remove from pan and serve with whiskey cream sauce.

Whiskey cream: In a large skillet melt butter over medium-high heat, add shallots and garlic; cook stirring for about 2 minutes or until shallots are softened. Add oil, Portobello, oyster and button mushrooms; cook stirring frequently for about 8-10 minutes or until liquid is evaporated and mushrooms have browned. Stir in whiskey and cook scraping up any bits stuck to the pan to deglaze. Stir in beef stock and cook stirring occasionally until almost all the liquid has evaporated, about 5 minutes. Add cream and simmer stirring occasionally, until sauce thickens and has reduced by three quarters. Stir in cheese, thyme and season with salt and pepper. Serve in wide rimmed bowls with mushroom mixture on the bottom and scallops on top. Garnish with shaved cheese.