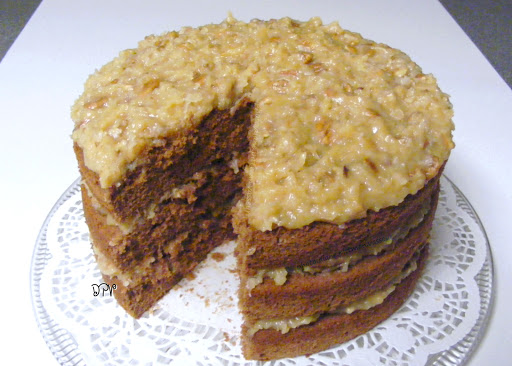 Mild chocolate flavored cake layers are stacked high with a creamy coconut-pecan frosting. This decadent cake is worthy of a special occasion, or any time. 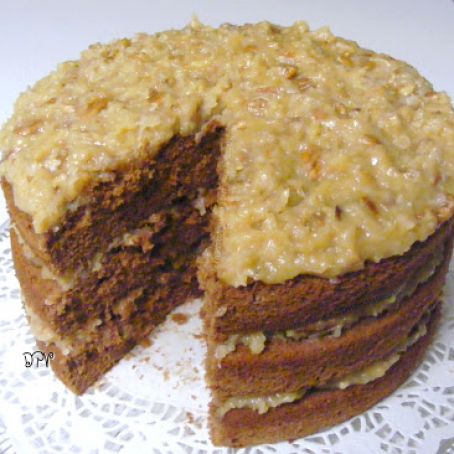 Grease the sides of three 9-inch round cake pans with butter and line the bottoms with parchment paper.

Put the chocolate chunks in a small bowl and pour the boiling water over it. Let stand for about 1 minute and then whisk until the chocolate is dissolved. Set aside until cool to the touch before using in the batter.

In a mixing bowl, whisk together the flour, baking soda, and salt. Set aside.

In a small bowl, whisk the eggs and set aside.

In a large mixing bowl and using a mixer on medium speed, beat the butter for a few seconds until creamy. Slowly, add the sugar in a steady stream while mixing, then beat until the mixture is pale and fluffy, 4 to 5 minutes, scraping the bowl as necessary.

Still on medium speed, beat in the whisked eggs a little at a time, over 1 1/2 minutes to add them all. Beat in the melted chocolate and vanilla just until blended.

On medium-low speed of mixer, alternately beat the flour mixture and buttermilk into the chocolate mixture just until each addition is incorporated, starting and ending with flour mixture, scraping down the bowl as necessary. Divide the batter among the cake pans.

Bake for about 25 minutes, or until centers spring back when very gently pressed with a finger. Cool the cakes cool in their pans on a rack for 10 minutes.

Run a thin knife around the edges of cake pans to loosen the cakes. Turn the cakes out onto the wire racks and peel off the parchment. Let cool completely before frosting.

Whisk the egg yolks with the evaporated milk, sugar, vanilla, and salt in a heavy 2-quart saucepan. Add the chopped butter. Set over medium heat and bring the mixture to boil; cook, stirring constantly, until golden and thickened, 3 to 4 minutes, reducing heat by one mark, if needed, to prevent scorching. Remove from heat and stir in the coconut and pecans. Set aside to cool completely. 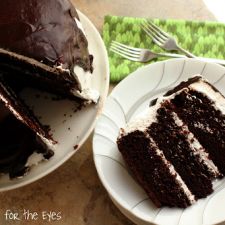