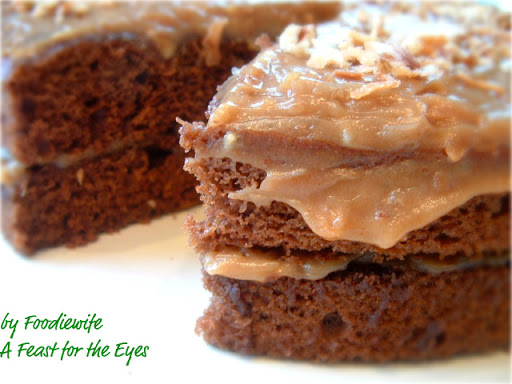 Cook's Country Magazine featured a Reduced-Fat German Chocolate Cake. I decided to give this recipe a try because I was impressed with the calorie and fat reduction:

I was pleased that the cake turned out very moist! Overall the cake was very easy to make, as was the frosting. I'd make this recipe again! You can see how I made this cake, along with some baking tips at: http://foodiewife-kitchen.blogspot.com/2010/01/guilt-free-german-chocolate-cake-that.html 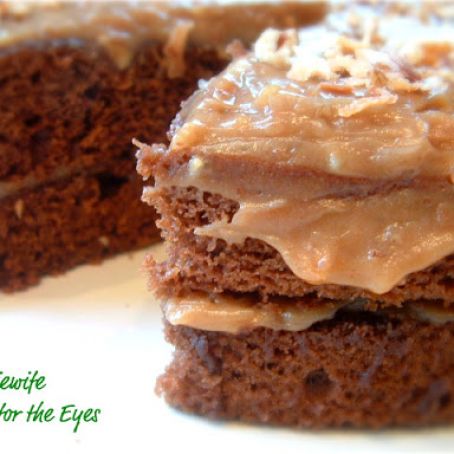 Combine flour and baking soda in separate bowl. With electric mixer on medium-low speed, beat butter, sugars, and salt until combined. Increase speed to medium and beat until mixture -lightens in color and sticks to sides of bowl, about 1 minute.

Scrape down bowl, then add eggs, 1 at a time, and mix until well combined, about 45 seconds.

Reduce speed to low and add chocolate mixture and vanilla until incorporated. Add flour mixture in three additions, alternating with 2 additions of sour cream, and mix until just combined.

BAKE CAKE Divide batter into prepared pans and bake until toothpick inserted in center comes out clean, 10 to 15 minutes.

Cool cakes in pans 10 minutes, then turn out onto wire rack and cool completely, at least 1 hour. (Cooled cakes can be wrapped in plastic and stored at room temperature for 2 days.)

Continue to cook until mixture is thickened, about 1 minute.

Off heat, stir in vanilla and all but 1 tablespoon each of pecans and coconut. Cool to room temperature.

ASSEMBLE CAKE Place 1 cake round on serving platter. Spread with half of frosting, then top with second cake. Spread remaining frosting over top of cake. Sprinkle with remaining pecans and coconut. Serve. 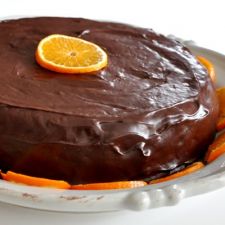