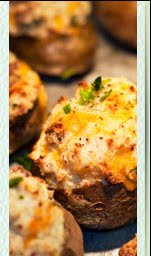 Potatoes are undoubtedly one of the most popular comfort foods in the world. Mashed, fried, au gratin, twice-baked—it’s hard to contemplate a preparation that isn’t comforting. Understandably, it might be difficult to envision the simple potato elevated to gourmet cuisine. But Chef Nuetzi has done it. Thanks to one of the most coveted ingredients on Earth: White Truffle Oil. When mixed with heavy cream, sour cream and parmesan, this twice-baked marvel is apt to steal the spotlight from your main entrée. A risk, we think you’ll agree, quite worth taking. 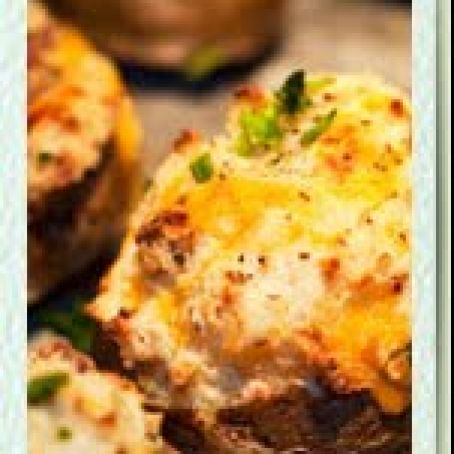 Scrub potatoes well in cold water to remove any excess dirt.
Coat the potatoes with the olive oil and 1 Tbsp of the kosher salt. Bake potatoes in a 425°F oven for one hour, until a knife passes easily into the center of the potato. Allow potatoes to cool to room temperature.
Create an oval incision just through skin on top of potato and gently remove the skin. Draw a pattern of 1/2” squares through the flesh of the potato and carefully scoop out flesh, being careful not to break the skin of the potato.
Place chunks of potato in stainless mixing bowl and add the sour cream, heavy cream, chives, truffle oil and 3/4 cup Parmesan cheese. Mix very gently until just combined to avoid making the potato mixture pasty. Season with salt and black pepper to taste.
Carefully place the mixture back in the shell, being careful not to pack too tightly. (The texture should be loose and resemble a dry potato salad.) Sprinkle top of potatoes with 1/4 cup Parmesan cheese and dot each potato evenly with cubes of the butter.
These steps may be completed up to 12 hours in advance. Store the potatoes in the refrigerator until ready to use.

When Ready to Serve
Bake the potatoes at 400°F for 15 minutes, until hot in the center and golden brown on top. 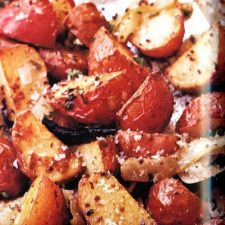