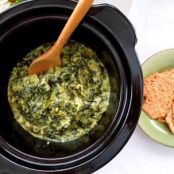 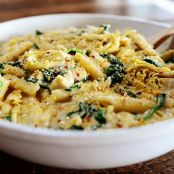 For roasting the poblano pepper

Preheat the oven to 475 degrees. Split the pepper in half lengthwise so it will lay relatively flat. Remove the stems, seeds, and ribs. Place the pepper halves in a foil lined rimmed baking sheet skin side up. Bake until the skin is blistered over most of the surface, 15-25 minutes. Remove the pepper from the oven and carefully fold the edges of the foil to wrap the pepper up. Let sit for 15 minutes. When cool enough to handle, peel away the skin and discard. Coarsely chop the pepper and set aside.

Melt the butter in a medium saucepan. Stir in the chopped poblano pepper. Add in the flour and cook, stirring constantly, for 2 minutes. Whisk in the broth and garlic powder. Let cook over medium heat, stirring frequently, until the mixture bubbles and thickens. Remove from the heat and stir in the sour cream and cilantro. Season with salt and pepper to taste. Set aside.

Preheat oven to 400 degrees. Spray a 9x13 inch or a 7x11 inch baking dish with non-stick cooking spray (see Notes). Warm tortillas in microwave for 60-90 seconds so they are soft enough to roll. Place about ⅓ cup of the filling mixture in a line down the center of a tortilla. Roll up tightly and place in the prepared baking dish, seam-side down. Repeat with the remaining filling and tortillas. Pour the poblano sauce over the top of the enchiladas. Press down on the tortillas slightly with a rubber spatula so that some of the sauce seeps into the enchiladas. Sprinkle with cheese and bake until bubbling and slightly golden, about 20-25 minutes. Sprinkle with additional cilantro.

Notes
Depending on how spicy you like your enchiladas, you may not want to use the entire can of chilis. Start by adding about half the chilis, taste, then add more as desired.