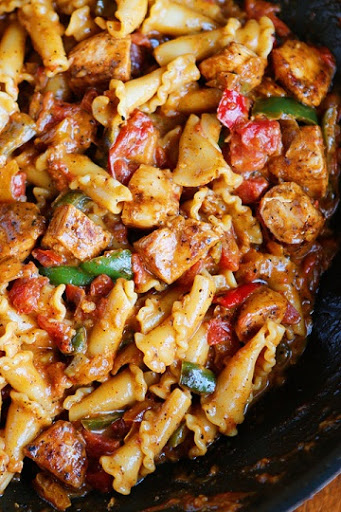 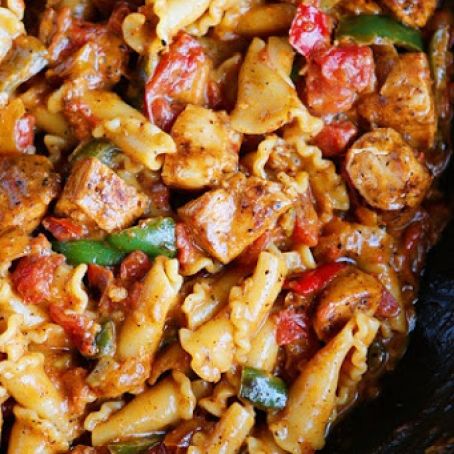 Cut the chicken into bite-sized pieces. Season with half of taco seasoning. In a 12-inch skillet, heat 1 tablespoon olive oil over high heat. When the oil is very hot, carefully add the chicken in a single layer and cook without stirring until one side is seared and browned, about 1-2 minutes. Flip the chicken to the other side and cook until browned. Remove the chicken to a plate and set aside.

Add the remaining 1 tablespoon of olive oil to the skillet with the heat still on high. When the oil is very hot again, add the onions, bell peppers, and remaining taco seasoning. Cook, stirring occasionally, until the veggies are slightly blackened. Turn heat to low, add minced garlic, and stir until fragrant and well combined, about 30 seconds. Remove the veggies to the plate with the chicken.

In the same skillet, add the broth, cream, diced tomatoes, uncooked pasta, and salt. Stir to combine and bring to a boil, then cover, reduce heat to medium-low, and cook for 15 minutes until pasta is tender and liquid is mostly absorbed. Add the chicken and veggies back into the skillet and stir to combine until heated through, about 2 minutes. Serve with buttery garlic bread and enjoy! 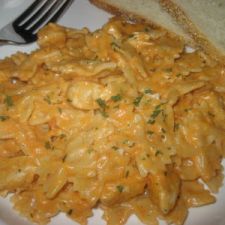