Mexican braise, chili, or stewed vegetables. If using a meat, make sure it is shredded or ground, since large chunks of meat won't make an even layer of filling. 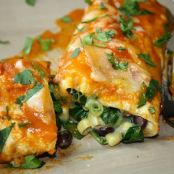 Combine lard, salt, and baking powder and, using an electric mixer, beat at medium-high speed until lightly whipped, about 1 minute.

Add 1/4 of the re-hydrated masa at a time to the lard, beating between additions until thoroughly incorporated. The masa should be soft and spreadable, with a hummus-like texture.

Cover masa with plastic and refrigerate for 1 hour.

Meanwhile, For the Filling: Microwave ancho chilies until fragrant and pliable, 15 to 30 seconds. Transfer to microwave-safe bowl or measuring cup, add broth, cover tightly with plastic wrap, and microwave on high power until barely simmering, about 3 minutes. Let steep for at least 5 minutes.

In a skillet, heat lard over medium-high heat until shimmering. Add onion and garlic and cook until softened, about 3 minutes. Add beans and cook until heated through. Using a potato masher, bean masher, or wooden spoon, mash beans to form a chunky puree. Stir in ancho mixture and cook, stirring, until thickened, about 5 minutes.

Assembly and Baking: Preheat oven to 375°F. Remove masa from refrigerator, discard plastic, and re-whip, adding water 1 tablespoon at a time, if necessary, to return it to original hummus-like texture. Lightly grease a 12-inch cast iron skillet or 3-quart casserole dish with cooking spray or oil, wiping up any excess.

Scrape 2/3 of masa into skillet and press to form an even thin layer on bottom and edge of pan.

Add 2 cups of black bean filling, smoothing to an even layer. Save any remaining filling for another use.

Gently form a top crust with remaining 1/3 masa, binding it with edge. Wipe any masa residue from rim of skillet. Bake tamale pie until cooked through and lightly golden on top, 45 minutes to 1 hour. Let cool slightly, then slice and serve, passing hot sauce and salsa verde at the table.