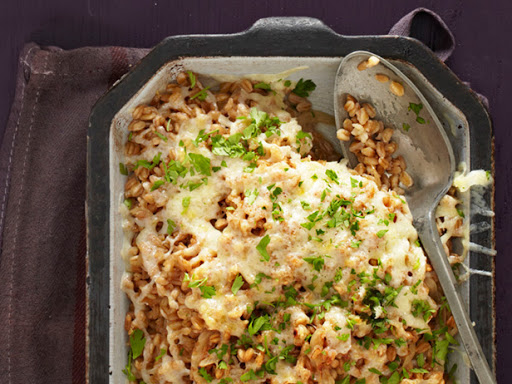 If making this recipe vegan, you can substitute with vegan parmesan and Daiya provolone) 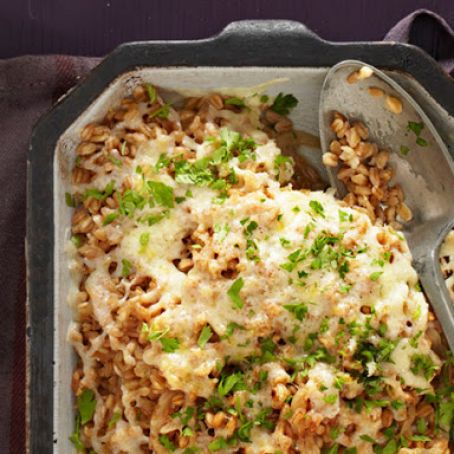 Position a rack in the upper third of the oven and preheat to 400 degrees F. Melt the butter in a medium pot over medium-high heat. Add the onion and cook, stirring, until softened, about 5 minutes. Add the brandy and cook until evaporated, about 2 minutes. Add the farro, Worcestershire sauce, 1/2 teaspoon salt and a few grinds of pepper; cook, stirring, until the farro is coated, 2 minutes. Stir in the vegetable broth, 1 1/2 cups water, the bay leaf and the parmesan rind. Bring to a boil, then stir in the grated parmesan.

Transfer the mixture to a 1 1/2-quart baking dish, cover with foil and bake until most of the liquid is absorbed and the farro is tender, about 40 minutes. Remove from the oven; discard the bay leaf and parmesan rind. Continue baking, uncovered, until all of the liquid is absorbed, about 5 more minutes. Sprinkle with the grated gruyere or asiago; turn on the broiler and broil until melted and golden brown in spots, about 1 minute. Top with the parsley.

Brussels Sprouts with Onion and Bacon