Chop pecans in blender until it turns into flour texture. Add melted butter and remaining ingredients. Press in the bottom of cheesecake pan and bake for about 10 minutes on 375.

Beat cream cheese until fluffy. The mixture will gradually become lighter, and the denser stuff has a tendency to cling to the bowl. You won’t be able to incorporate it as well later, so scrape the sides occasionally. Add spices and sweetener. Beat again, scrape again. Add pumpkin and vanilla. Beat well, scrape. Add 3 eggs. Beat well (about a minute), scrape. Add the other 2 eggs and cream and beat another minute. Put foil around the pan securely so that water doesn’t leak in. Pour mixture into pan over crust. Place pan in a baking pan and pour boiling water around the sides, about halfway up. Lower the oven temperature to 325 F. and bake for 60 to 90 minutes, checking often after an hour. When the cake is firm to touch but slightly soft in the center, remove from oven. Let the cheesecake cool to room temperature, or up to 3 hours. Cover and chill, ideally for another 3 to 4 hours. 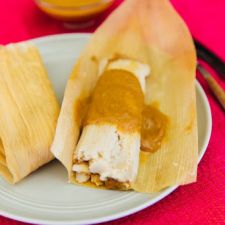