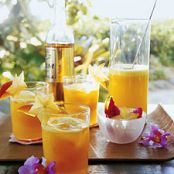 Preheat the oven to 350 degrees. Generously butter a 10- by 14-inch baking dish with the softened butter. Whisk the eggs in a large bowl. Add the coconut milk, Coco Lopez, brown sugar, rum, 2 tablespoons melted butter, vanilla, ginger, cinnamon, and nutmeg, and whisk well to combine. Add the bread and mango, and stir well. Pour into the prepared dish. Bake until firm when pressed in the center, about 1 hour. Cool on a wire rack until just warm, about 20 minutes. Serve warm, sprinkled with the fried coconut strips and drizzled with the caramel rum sauce.

For the Caramel Rum Sauce: In a medium non-stick saucepan, combine 2 3/4 cups of the cream with the rum and sugar. Bring to a simmer over medium heat, stirring to dissolve the sugar. Remove from the heat. In a small bowl, dissolve the cornstarch in the remaining 1/4 cup cream. Add to the warm rum mixture and return to medium heat. Simmer, stirring, until the mixture thickens, 4 to 5 minutes. Remove from the heat and serve warm with the bread pudding. (Makes about 3 cups)

For the Fried Coconut Strips: Fill a 6-quart pot halfway with oil and heat to 360 degrees.

Sprinkle with the powdered sugar while still warm, and sprinkle over the bread pudding. (Makes 1 cup)

To Open And Peel The Coconut: Place the coconut flat on a work surface covered with a kitchen towel. Using a hammer or large meat mallet, drive a large nail or metal skewer into 1 of the eyes. Drain the liquid into a container and reserve for another use.

Place carefully whack the center of the coconut with a meat mallet or the blunt back of a large, heavy cleaver several times until it cracks open cleanly into 2 halves.

Wrap the coconut in the towel and whack it several times with a hammer to break into pieces. Using a short, heavy knife, carefully pry the meat away from the shell. (If necessary, loosen the meat from the shell by heating the coconut for 15 to 20 minutes in a 400 degree oven.)

Trim any remaining brown skin from the meat with a small, sharp knife.

To grate the coconut, use the large side of a heavy grater. To make coconut ribbons, use a vegetable peeler. Wrap in plastic wrap until ready to use. (Makes 2 cups)

This recipe yields 8 to 10 servings. 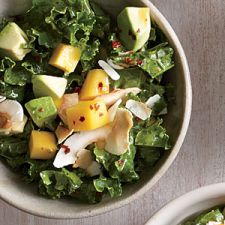 Kale Salad with Mango and Coconut