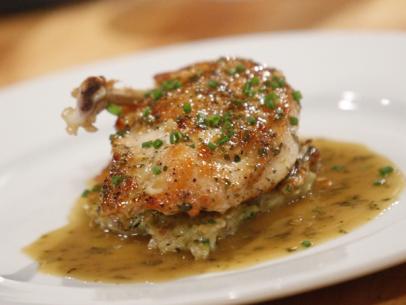 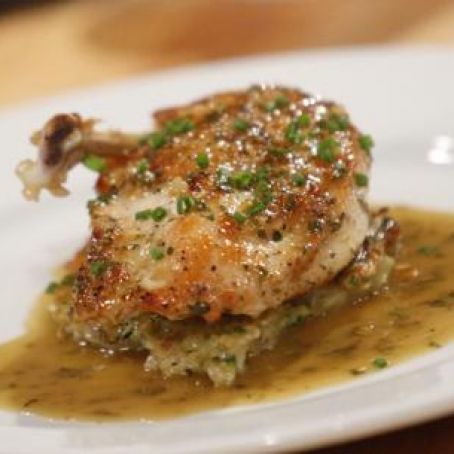 Heat a large saute pan over high heat and add the oil. Season both sides of chicken breast with salt and pepper, to taste. Sear the chicken, skin side down, 4 to 5 minutes. Reduce the heat to medium, flip the chicken, cover the pan and cook on second side for 7 to 8 minutes.

After second side has been cooked, add the wine, garlic, and herbs and continue to cook until the liquid is reduced by half.

Transfer the chicken to a serving platter and allow it to rest.

Remove the pan from the heat and whisk in the butter, scraping up the bits from the bottom of the pan.

Serve the chicken with Potato-Vegetable Hash and the pan sauce. Garnish with chives.

Potato Vegetable Hash:
Using a box grater, shred the potato, zucchini and squash, and add them to a large bowl.

Stir in the onion, egg, flour, garlic, herbs, and Cajun spice. Blend well. Add more flour if mixture is too wet. The mixture should hold its shape when squeezed.

Heat a large saute pan over medium heat. Add 2 tablespoons grapeseed oil. Portion the hash into 2 cakes, then gently put them in the pan. Cook until golden brown, about 2 to 3 minutes, then flip and cook until the other side is browned. Remove them from the pan to a paper towel and season with salt, to taste. Serve warm. 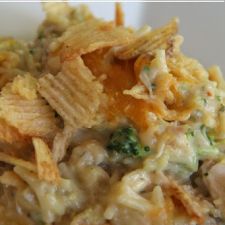