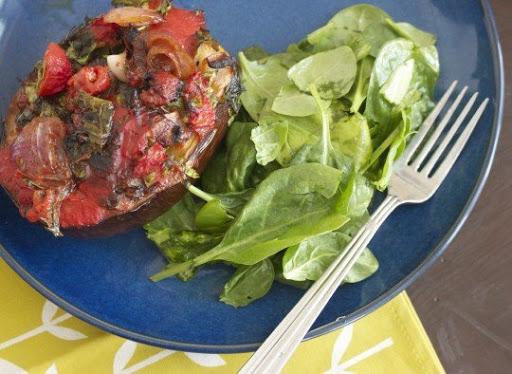 Eggplant can get a bad rap. Some people find it mushy while others may find it stringy or even tasteless. But if it's prepared well, eggplant can be an extremely satisfying meat substitute and, when joined with a few tomatoes and fresh herbs, the perfect summer meal.

I like this recipe a lot because it doesn't try and dress up the eggplant with too much oil or gobs of cheese. So often people will fry up their eggplant (which isn't half-bad, I'll be the first to admit) or douse it with loads of olive oil and cheese while baking in the oven. Especially in the hot summer months, it's nice to let eggplant stand on its own as it does here.
Recipe came from: http://www.thekitchn.com/recipe-braised-eggplant-and-to-151513 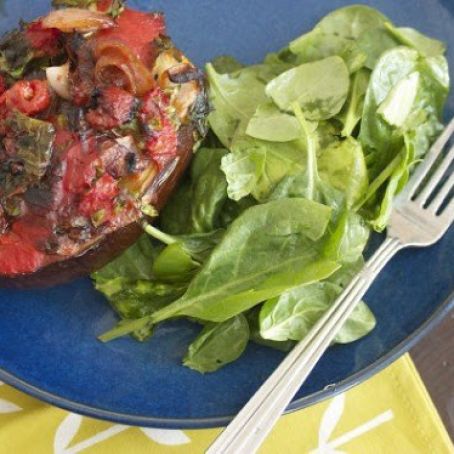 Pre-heat oven to 400 F. Place eggplant halves in a 9x9 pan, cut sides up. Sprinkle each half with about 1/4 teaspoon salt.
Reserve the remaining salt for later use.
In a small skillet over medium heat, saute onions in 2 tablespoons olive oil until translucent, about five minutes. Transfer
onions into a small bowl and stir in the tomato, basil, parsley, and remaining salt. Scoop the tomato mixture on top of the
eggplant. Pour remaining olive oil into the bottom of the pan, cover with aluminum foil and bake for 10 minutes.
Baste eggplant with the liquid in the pan, then re-cover and bake for 15 more minutes. Baste again and bake until eggplants
are soft and tender, uncovered, about 20 additional minutes.