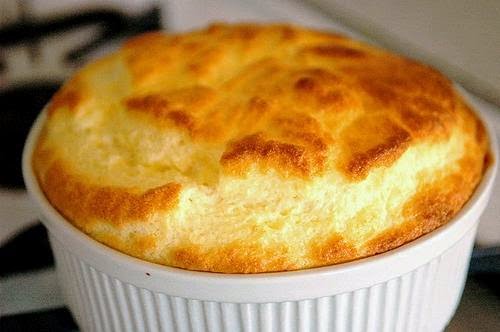 This shrimp souffle makes a nice project for a lazy Sunday lunch; no hurry to eat and a large appetite to appease. :) You can easily substitute the shrimp with crab meat or tuna. Serve with shrimp and wine sauce and a light side salad. 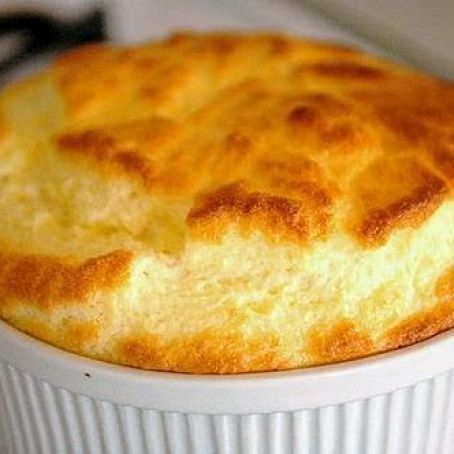 Heat the oil in a medium pan, saute onions and garlic until they are translucent. Toss in the cleaned shrimp along with the thyme, oregano, paprika, cayenne, salt and pepper. Saute for a 5 to 6 minutes until the shrimps are completely cooked and opaque. Remove from heat and cool. Divide the shrimp mixture into two parts - finely mince one and rough chop the other.

Preheat oven to 400°F. Heat the milk till it is scalding but not boiling. In a sauce pan over low heat, melt 3 tablespoons of butter and add 3 tablespoons of flour to it. Stir the mixture continuously till the flour is cooked and the roux is light golden, about 2 to 3 minutes. Add the hot milk and continue stirring till the mixture thickens and becomes smooth. Remove from heat and mix in the egg yolks one at a time. Stir in the parmesan and the finely minced shrimp mixture.

In a large bowl, whisk together egg whites, pinch of salt and cream of tartar. Beat on low speed for 1 minute, on medium speed for 1 minute, then finally on high speed until they form firm, glossy peaks. Whisk 1/4 of the egg whites into the shrimp and white sauce mixture and then carefully fold in the rest.

Pour into a 1.5-quart souffle dish that has been buttered and coated lightly with parmesan cheese. Smooth the top. Place in the middle rack of the oven. Turn the temperature down to 375°F and bake for 30 to 35 minutes until puffed and golden.

Important: Do NOT open the oven in between to check!

While the souffle bakes, add stock to the pan in which shrimp mixture was made. Over medium heat, add the wine to it to deglaze it. Reduce the mixture to half. Add the tomato paste and rough minced shrimp mixture and cook for 2-3 minutes. Stir in the cream and remove from heat. Just before serving, reheat the sauce and melt in 1 tablespoon of butter. Sauce will be chunky in texture which lets you taste the shrimp as you bite into the bits.

Serve the souffle immediately after removing from oven with a generous helping of the shrimp and wine sauce and green salad.