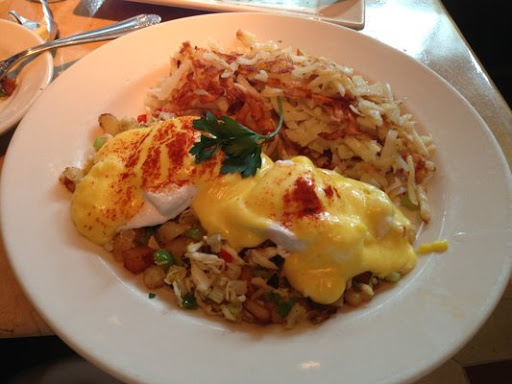 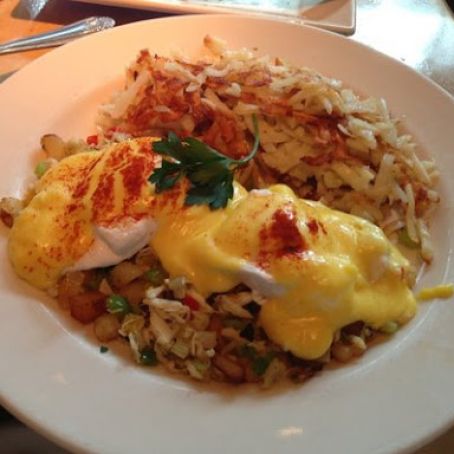 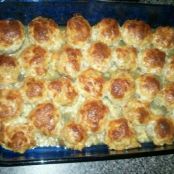 Remove any cartilage and shell from the crab meat. Cut the meat into chunks. Cover and refrigerate.

Boil the potatoes in lightly salted water until thoroughly cooked, about 30 minutes. Drain and let cool. Cut the potatoes, with their skins, into 1/2 inch dice. Place in a mixing bowl.

Cook the bacon in a saute pan over medium heat until browned and crisp. Remove the pan from the heat and, using a slotted spoon, remove the bacon from the pan, leaving the fat in the pan. Add the bacon to the potatoes.

Return the saute pan to the heat and add the onion and pepper. Turn up the heat and cook for 5 to 6 minutes until browned. Add the thyme and paprika, mix well and remove from the heat.

Add the onion and pepper (including the fat) to the potatoes. Mix in the crab meat and season with salt and pepper. Mix very well, mashing the potato a bit so that the mixture sticks together. Divide the mixture into four 8-ounce portions and shape into 5 inch cakes. Refrigerate until ready to cook.

Fill a deep pan with water for poaching the eggs. Lightly salt the water and add 1 tablespoon white vinegar for each cup of water. Bring to a boil, then lower the heat so that it barely simmers. Heat the oil in a well-seasoned large skillet over medium high heat. Cook the hash"cakes" .

Center each hash cake on a medium plate and, using a slotted spoon, gently place a poached egg on. Grind a bit of pepper over each egg and sprinkle the scallions over the entire dish. Serve at once topped with the hollandaise sauce.

Beat egg yolks, lemon juice, salt, and cayenne pepper together in a microwave-safe bowl until smooth. Slowly stream melted butter into the egg yolk mixture while whisking to incorporate. Heat in the microwave for 15-20 seconds and whisk. Makes enough for the dish above.

Note: If the sauce separates after microwaving, just add a splash of water and whisk until combined.

On top of the stove, heat a large heavy skillet over medium heat. Add 1 tablespoon of the butter to the hot pan and heat until it begins to foam. Season the beef with salt and sprinkle cracked black pepper over both sides of steaks, pressing pepper into steaks. Add the first steak to skillet and sear, cooking no more than 1 to 2 minutes before turning it over and cook 1 minute on the second side.

Remove the steak from the pan to a warm ovenproof platter. Repeat with the remaining steak. Keep Steaks warm in low oven.

After the steaks are cooked and warming, add the pearl onions to skillet, add more butter if needed, cook 2 minutes until translucent. Add mushrooms and saute 1-2 minutes. Add the wine and Worcestershire sauce to the pan, bring quickly to a boil. Stir in the mustard. Allow this to cook 1 minute before adding the stock. Cook 1 minute more. Add the cream. Bring just to a boil. Remove from the heat and stir in the chives. Place steaks on individual plates topping with sauce. 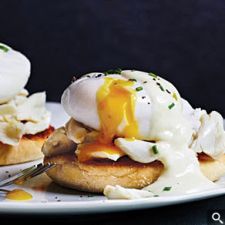