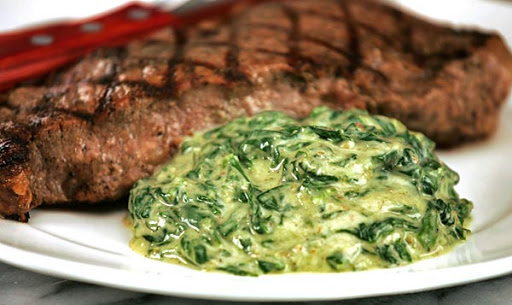 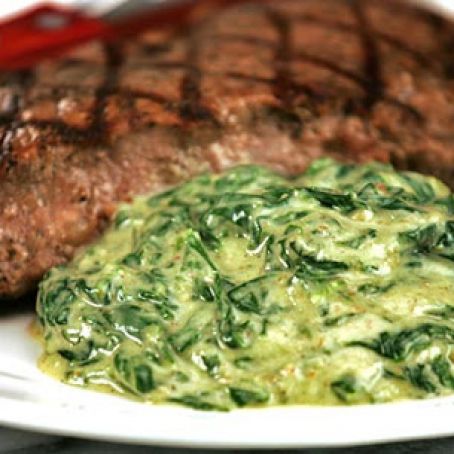 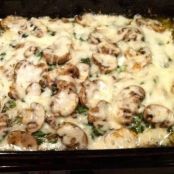 Spinach base:
1. In a large skillet, cook the chopped bacon over medium-high heat until browned and crisp, stirring frequently, about 15 minutes.

2. To the pan, stir in the green onion, onion, chopped garlic, salt and pepper and simmer, stirring frequently, until the vegetables are tender, 10 to 12 minutes. Remove from heat.

3. Stir in the butter, then puree the mixture in a blender. (The base can be made ahead of time to this point and covered and refrigerated. Reheat before using.)

Creamed spinach:
1. Heat the spinach base in a large skillet over medium heat until warm. Gradually whisk in the flour until fully incorporated. Cook over medium heat for 10 minutes to cook out the flour taste, stirring frequently.

2. While the base is heating, scald the milk in a medium saucepan. Remove from heat but keep warm on the stove.

3. When the flour is cooked, whisk in the hot milk and half and half, mixing thoroughly. Bring the mixture to a boil over high heat. Reduce the heat to a simmer and continue to cook, stirring frequently, until the mixture is thickened to a cream sauce consistency, about 5 minutes.

4. Stir in the spinach, a little at a time, until all is added. Continue to cook until the creamed spinach begins to bubble, about 10 minutes.

5. Remove from heat and serve immediately. This makes about 4 1/2 cups creamed spinach. 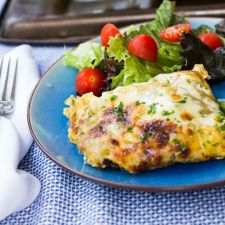