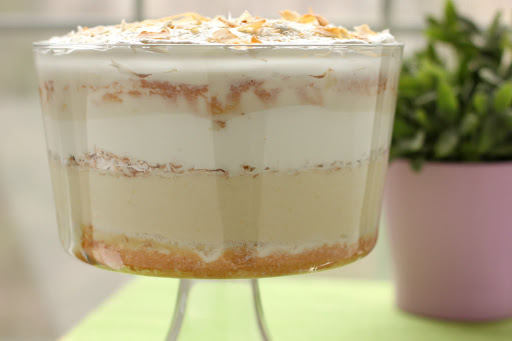 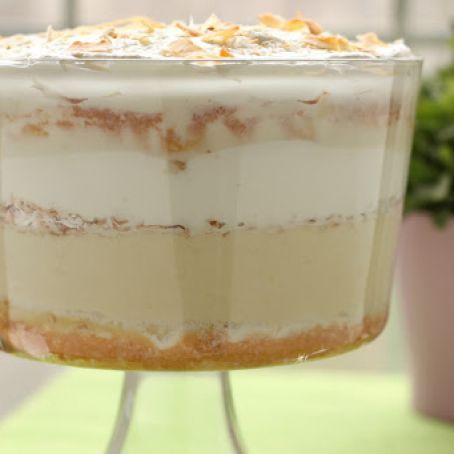 Note: This trifle actually tastes better if it can sit in the fridge for a day, so feel free to make it in advance. To toast coconut, spread it on a baking sheet and bake it at 350 degrees F for a few minutes, stirring every now and then, until it’s toasted and browning. Transfer it to a plate to cool before using it.

Make the coconut pastry cream: Mix the coconut milk, sugar, salt, and vanilla in a medium saucepan and heat it over medium heat. In a separate bowl, whisk together the egg yolks and corn starch. When the coconut milk mixture gets hot, temper the egg yolks by scooping up 1/2 cup of milk and slowly drizzling it into the yolks while whisking. This prepares them to be added to the hot mixture without becoming scrambled eggs! Now add the tempered yolks back into the coconut milk mixture that’s still on the stove and whisk for 3 minutes on medium-high, or until the mixture turns thick and bubbles. Make sure to whisk constantly for the full 3 minutes so your pastry cream doesn’t separate later. After the 3 minutes, whisk in the butter and then the coconut. Pour the cream into a shallow dish to let it cool.

Make the cake: Preheat oven to 350 degrees F and grease two 9-inch cake pans (I use Wilton’s Cake Release and put a circle of parchment paper, also greased, in each pan). In a medium bowl, beat the egg yolks with the 3/4 cup sugar until they are light and doubled in volume. Mix in the coconut milk, vanilla and coconut extracts, flour, and baking powder.

In a separate bowl (don’t use the same bowl as the yolks, because with any fat in the bowl, the whites won’t beat up), beat the egg whites until soft peaks form. Add the remaining 1/4 cup sugar and beat until stiff peaks form (but not until the whites become are dry). Fold the whites gently into the yolk mixture until no streaks remain and pour the batter into the prepared pans. Bake them at 350 degrees for 12-15 minutes or until a toothpick inserted into the center comes out clean. Allow them to cool for 10 minutes in the pan before running a knife around the edge of the cake layers and inverting them onto a cooling rack. Cool them completely.

Make whipped cream: Whip the 2 cups of cream and icing sugar together in a chilled bowl to stiff peaks.

Assemble the trifle: Whisk together the condensed milk, evaporated milk, and the coconut milk for the Three Milks Sauce. Place one cake layer in the bottom of your trifle dish and poke holes in it with a fork. Pour about 2/3 cup of the milks mixture over it and let it sit for around 30 minutes. Top it with all of the coconut pastry cream, a generous layer of toasted coconut (saving some for sprinkling on top), and half of the whipped cream.

Poke the other cake layer with a fork (you do this before you put it in the dish because it’s kind of hard to poke it once it’s on top of the splushy cream). Place it on top of the whipped cream layer in your trifle dish and pour another 2/3 cup of the milks mixture over it (you’ll have quite a bit of the milks mixture leftover, since your trifle would be too mushy if you used all of it. One resourceful person on All Recipes said she whisked an egg and some spices in, dipped bread in it, and used it to make French toast.) Cover the trifle and refrigerate it for 30 minutes. After chilling, frost the trifle with the remaining whipped cream and top with the remaining toasted coconut. Let the whole thing sit overnight in the fridge before eating — it gets better with time! Give it a whole day in there if you have the time 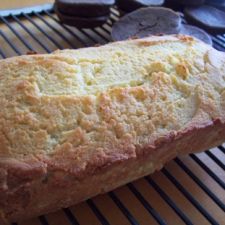