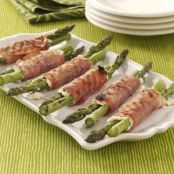 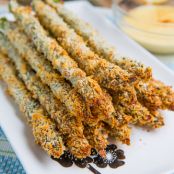 In a skillet, cook bacon over medium heat until crisp. Remove with a slotted spoon to paper towels; drain, reserving 1 tablespoon drippings. In the drippings, saute onion until browned; drain. Cut eight asparagus spears into 4in long spears for garnish. Cut remaining asparagus into 1 in. pieces. In a saucepan, cook all of the asparagus in a small amount of boiling water until crisp - tender; drain. In a bowl, toss the bacon, onion, asparagus pieces, cheese, flour, salt and pepper. Pour into pastry shell. In a bowl, beat eggs and cream; pour over bacon mixture. Top with asparagus spears. Bake at 400 degrees for 30 - 35 minutes or until a knife inserted near the center comes out clean and crust is golden brown. Let stand for 10 minutes before cutting.