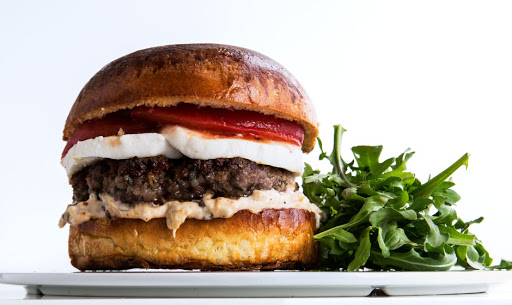 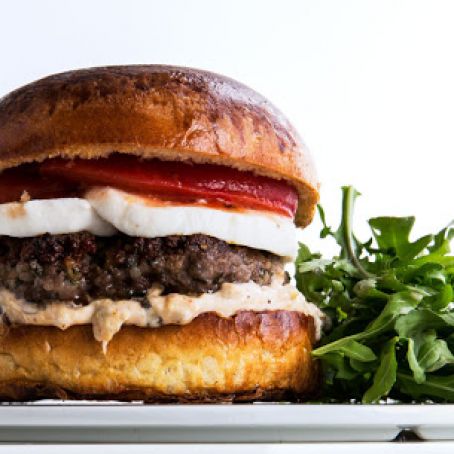 Aioli:
Whisk egg yolk and mustard in a medium bowl to combine. Whisking constantly, gradually drizzle in oil, drop by drop at first; keep going until aioli is thickened and smooth. Whisk in chipotle, garlic, lemon zest, and lemon juice; season with salt. Cover and chill.

Do Ahead: Aioli can be made 1 day ahead. Keep chilled.

Assembly:
Preheat oven to 225°. Toss tomatoes, thyme, and 1 Tbsp. oil on a baking sheet; season with salt and pepper. Arrange tomatoes cut side down and roast until skin is slightly browned and beginning to separate from flesh, 75–85 minutes. Let cool, then slip off skins.

While tomatoes are roasting, freeze bacon until almost frozen through, about 40 minutes (this will help it chop cleanly in the food processor). Pulse bacon in a food processor, scraping down sides of bowl as needed, until very finely chopped, about 1 minute.

Heat a grill pan or a cast-iron skillet over medium-high. Cook patties until lightly charred and medium-rare, about 2 minutes per side. Generously spread buns with aioli and build burgers with patties, roasted tomatoes, and mozzarella.

Toss arugula in another medium bowl with vinegar and remaining 2 tsp. oil; season with salt and pepper.

Serve burgers with arugula alongside.

*Raw egg is not recommended for the elderly, pregnant women, children under 4, and people with weakened immune systems. 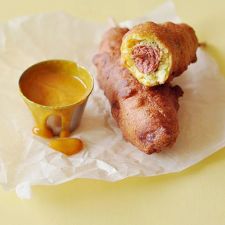