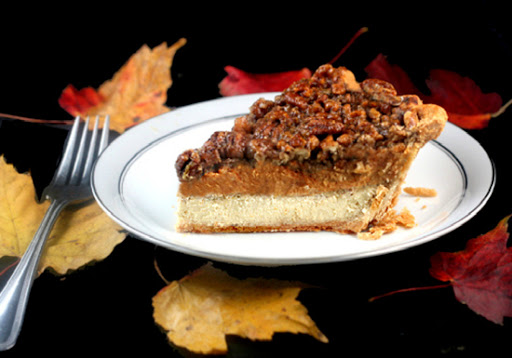 Three pies in one. No choosing, no juggling a slice of cheesecake, pecan pie and pumpkin pie on one plate, trying not to look silly as you take bites of each at once. 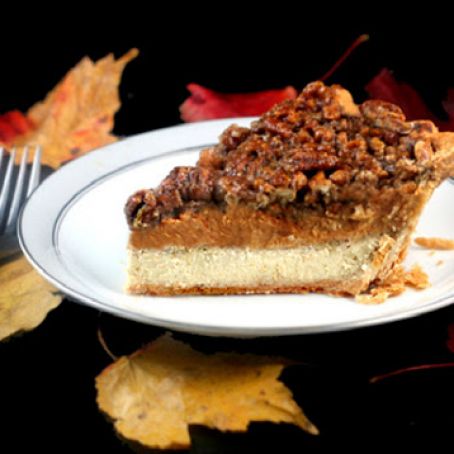 MAKE AND PARBAKE PIE SHELL:
1. Place the flour, sugar and salt in a food processor fitted with the metal chopping blade and pulse on and off until combined. Scatter the butter pieces and the shortening, in large chunks, over the flour mixture. Pulse the machine on and off until the mixture resembles coarse meal. Add 6 tablespoons of the ice water and process until the mixture just starts to come together. If the dough seems dry, add the remaining 2 tablespoons water as necessary. Do not allow the dough to form a ball on the blade, or the resulting crust will be tough! You want a raggedy mess of crumbly dough, with lumps of butter showing.

2. Turn the dough out onto a work surface, divide it in half, and shape each half into a disk – gently pressing each raggedy mess together, (DO NOT press into each disk or try to squeeze it together so the dough is uniform – it will come together in the refrigerator). Wrap the disks separately in plastic wrap and chill for at least 2 hours. You will only need one disk for this recipe, so you can freeze the other disk for later use.

3. Lightly flour a large work surface. Allow the dough to soften at room temperature just until it is pliable (about 10 minutes). Place 1 disk on the floured surface and sprinkle some flour over it. Roll the dough from the center out in every direction, flouring the work surface as necessary to prevent sticking. You want a round of dough that’s about 1/4 to 1/8 inch and about 3 inches greater in diameter than the pie pan/plate you are using.

4. Transfer the crust to a 9 1/2 to 10-inch deep-dish pie pan (if you don’t use a deep-dish pan, there will be pumpkin filling left over, not to mention you run the risk of overflow) by rolling it loosely around the rolling pin and unrolling it carefully over the pan. Press the dough first into the bottom of the pan and then against the sides. Patch any holes or cracks with dough scraps. Trim the edges of the dough with scissors, leaving about 3/4 inch of overhang. Fold overhang over and crimp as you please. Place shell in the freezer and preheat oven to 400 degrees F.

5. When oven temperature is at 400 F, remove the pie shell from the freezer and line the pie crust with a large sheet of lightly buttered aluminum foil, buttered side down, covering the edge of the crust so that it doesn’t get too brown. Fill the lined crust with pie weights, dried beans, or raw rice. Bake the pie crust for 15 minutes. Remove the weights and foil. Prick the bottom of the crust well with a fork and bake the crust for another 7 minutes, or until the edges are just beginning to turn golden, but the crust is not fully baked. Cool the pie crust on a wire rack while you make the filling. Reduce the oven temperature to 350 degrees F.

DIRECTIONS FOR PIE:
1. Preheat oven to 350 degrees F. In a medium bowl, beat cream cheese until smooth. Beat in 1/4 cup sugar, then add vanilla and 1 egg. Beat mixture until smooth.

2. Pour the cream cheese mixture into the bottom of the par baked pie shell, spread evenly, then freeze for about 15 -20 minutes.

4. Remove the pie shell with cream cheese from the freezer and pour the pumpkin mixture on top of it. Freeze for 15 to 20 minutes.

5. Combine the eggs, sugars, melted butter, corn syrup, vanilla extraxt and salt in a bowl. Stir in pecans. Remove pie from freezer and carefully spoon the pecan layer over the pumpkin layer.

6. Place pie on the middle rack of your preheated oven. Cover edges of crust with aluminum foil or a pie crust shield if browning too quickly, but you will eventually have to cover it to prevent excess browning some time toward the end. Keep checking every 20 minutes.

7. Bake in 350 degree F oven for about 60 to 75 minutes (It really depends on your oven. In one oven I used, it took 75 minutes, in another, 60 – so keep checking for it to be sturdy, but still a tad jiggly in the middle). The the pecan pie topping should be dark and bubbling a bit.

7. IMPORTANT – Let cool at room temperature, then refrigerate for several hours before slicing and serving. Also, sometimes some of the cheesecake filling or pecan pie filling affects the color of the pumpkin filling. It may not look a beautiful, dark orange, but rather a yellowish color. No worries, still tastes awesome!

8. Drizzle with melted chocolate or chocolate ganache for extra decadence!

*Alternate Pecan Pie Topping and Directions (this is the first recipe I played with..for a more crunchy than gooey topping)

Directions after Pumpkin Layer above – Step 7

7. After pie has been in oven for 50 – 60 minutes, remove from the oven and remove silver foil around edges of crust. Sprinkle pecan pie topping evenly over top – the pumpkin pie layer will sink a bit because the pecan goo is heavy, do not worry! Place back in the oven and bake for an additional 15 to 20 minutes, until a toothpick inserted in center comes out clean and the pecan pie topping is bubbly. Let cool at room temperature, then refrigerate for several hours before serving.

8. Drizzle with melted chocolate or chocolate ganache for extra decadence!