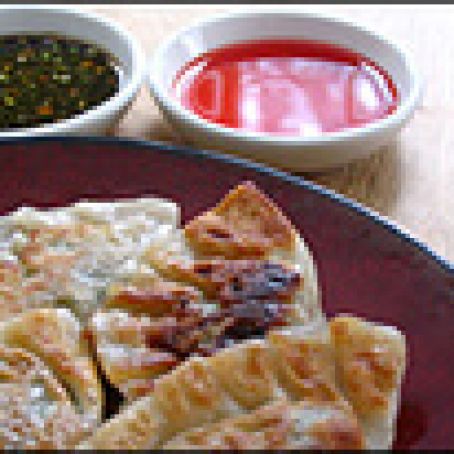 To make the filling:

Combine the cabbage and salt in a bowl and toss lightly; let rest for 30 minutes. Squeeze the water out of the cabbage and place it in a large bowl. Add the remaining ingredients, stir until well mixed, and drain off any excess liquid.

To wrap the dumplings:

Keep the round wrappers covered in plastic while you work, so they don't dry out. Have a small bowl of water handy.

Holding one wrapper in your palm, place about 2 teaspoons of filling in the center. Dip your finger in the water and trace a wet arc along the edge of the wrapper. Fold the wrapper in half over the filling, fitting the dry edge to the wet, and seal with your fingertips. You now have a dumpling in the shape of a half-circle.

Dip your finger in the water again and dampen the edge of the half-circle. Make a series of 6 or 7 small pleats in the edge, pinching them together with your fingertips. If freezing dumplings, do it now, before cooking.

To fry the dumplings:

Heat 1 tablespoon of oil in a heavy skillet over medium heat until shimmering but not smoking. Add one layer of dumplings, making sure the edges don't touch. When the first side is golden-brown, flip and brown the other side. Add 1/3 cup of water, cover and steam for 2 minutes. When the wrappers are just translucent, uncover, raise the heat. Remember to boil off all the remaining water: Soggy dumplings are nobody's friend. And a good spatula is a big help if the potstickers are living up to their name. It's also possible to boil or steam dumplings.


Black vinegar dipping sauce
In a small bowl combine the ginger and scallions. Add the sugar, vinegars and sesame oil. Crush the mixture lightly with a fork or chopsticks to help release the flavors. Let it rest for at least 5-10 minutes. 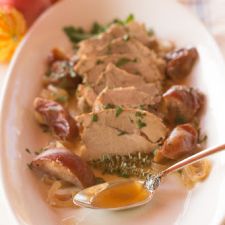