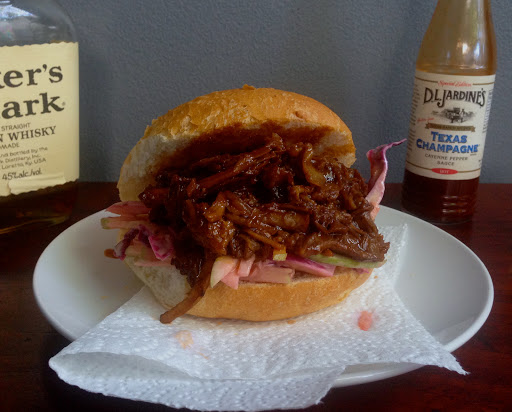 The ultimate Pulled Pork, made in 3 hours, no less! Stuff into soft white rolls with coleslaw, and apply liberal amounts of hot sauce!

Pre-heat your BBQ grill. Brush onions with a little oil and season with salt. Rub pork all over with oil, salt and pepper and cook on the BBQ for 30-40 minutes until browned all over. You can close the lid if your grill has one, to allow the smoky flavour to permeate the meat. Grill the onions, garlic and ancho chilli until charred and aromatic, then place with the pork inside a large pot. Pour over the beef stock and Dr. Pepper, bring to the boil, then reduce to low, cover with a lid and cook gently, turning occasionally for 2.5 hours until meat is tender.

Carefully remove from the cooking liquid and shred the meat using two forks. Discard bone, skin and fat, then toss the shredded meat through the BBQ sauce. Bring the cooking liquid back up to the boil, then simmer rapidly until reduced into a thick, viscous, meaty gravy. Stir the pork back through the liquid, and keep warm until ready to serve.

Stuff into soft white rolls with a red cabbage and apple slaw, or spoon into tacos with a tomato, coriander and red onion salsa!