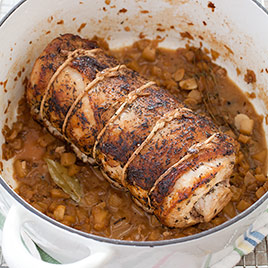 When butterflying a narrow roast like pork tenderloin, a single bisecting cut will usually suffice. But to open up wider roasts like the center-cut pork loin used in our French-Style Pot-Roasted Pork Loin, we make two parallel cuts. This technique exposes more of the meat's surface area to flavorful seasoning.

1. Holding chef’s knife parallel to cutting board, insert knife one-third of way up from bottom of roast and cut horizontally, stopping ½ inch before edge. Open up flap.

2. Make another horizontal cut into thicker portion of roast about 1/2 inch from bottom, stopping about 1/2 inch before edge. Open up this flap, smoothing out rectangle of meat.
Technique
Secrets to Juicy, Rich-Tasting Pot-Roasted Pork Loin

Thanks to their well-marbled pork, the French can get away with pot-roasting the loin, one of the leanest cuts of the pig, without drying it out. Here’s how we adapted their approach to super-lean American pork loin.

"DOUBLE-BUTTERFLY" AND SALT Opening up the roast like a tri-fold book creates more surface area for seasoning, ensuring that the salt thoroughly penetrates the meat.

ADD FAT Spreading garlic butter over the surface enriches this lean cut, bringing it closer in flavor and juiciness to well-marbled French pork. We then fold up and tie the roast.
SEAR
SEAR

SEAR TIED ROAST ON 3 SIDES Browning only the sides of the roast that are not in contact with the pan during roasting prevents the bottom of the meat from overcooking.
COOK
COOK

COOK IN LOW OVEN Roasting the pork in a gentle 225-degree oven until medium guarantees that the meat will cook up tender and juicy, not chalky and dry.
ADD
ADD

ADD GELATIN Adding gelatin to the exuded meat juices replaces the body and richness lost by omitting the pig’s trotter used in the French original. 1. Adjust oven rack to lower-middle position and heat oven to 225 degrees. Melt 1 tablespoon butter in 8-inch skillet over medium-low heat. Add half of garlic and cook, stirring frequently, until golden, 5 to 7 minutes. Transfer mixture to bowl and refrigerate.

2. Position roast fat side up. Insert knife one-third of way up from bottom of roast along 1 long side and cut horizontally, stopping ½ inch before edge. Open up flap. Keeping knife parallel to cutting board, cut through thicker portion of roast about ½ inch from bottom of roast, keeping knife level with first cut and stopping about ½ inch before edge. Open up this flap. If uneven, cover with plastic wrap and use meat pounder to even out. Sprinkle 1 tablespoon salt over both sides of loin (½ tablespoon per side) and rub into pork until slightly tacky. Sprinkle sugar over inside of loin, then spread with cooled toasted garlic mixture. Starting from short side, fold roast back together like business letter (keeping fat on outside) and tie with twine at 1-inch intervals. Sprinkle tied roast evenly with herbes de Provence and season with pepper.

3. Heat 1 tablespoon oil in Dutch oven over medium heat until just smoking. Add roast, fat side down, and brown on fat side and sides (do not brown bottom of roast), 5 to 8 minutes. Transfer to large plate. Add remaining 1 tablespoon oil, apple, and onion; cook, stirring frequently, until onion is softened and browned, 5 to 7 minutes. Stir in remaining sliced garlic and cook until fragrant, about 30 seconds. Stir in wine, thyme, and bay leaf; cook for 30 seconds. Return roast, fat side up, to pot; place large sheet of aluminum foil over pot and cover tightly with lid. Transfer pot to oven and cook until pork registers 140 degrees, 50 to 90 minutes (short, thick roasts will take longer than long, thin ones).

4. Transfer roast to carving board, tent loosely with foil, and let rest for 20 minutes. While pork rests, sprinkle gelatin over 1/4 cup chicken broth and let sit until gelatin softens, about 5 minutes. Remove and discard thyme sprigs and bay leaf from jus. Pour jus into 2-cup measuring cup and, if necessary, add chicken broth to measure 1¼ cups. Return jus to pot and bring to simmer over medium heat. Whisk softened gelatin mixture, remaining 1 tablespoon butter, and parsley into jus and season with salt and pepper to taste; remove from heat and cover to keep warm. Slice pork into 1/2-inch-thick slices, adding any accumulated juices to sauce. Serve pork, passing sauce separately. 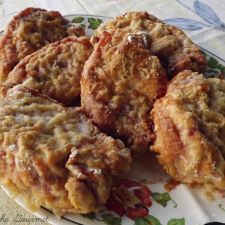