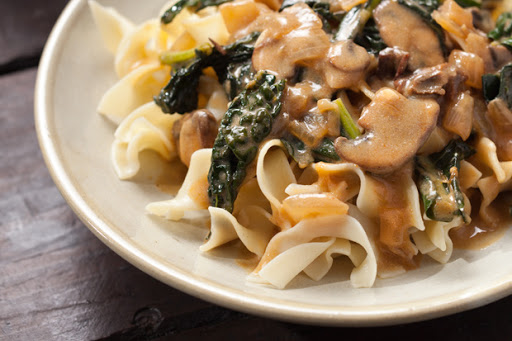 Stroganoff is best known as a beef dish, but you won’t miss the meat in this vegetarian version. To keep the flavor deep and umami-rich, we add the soaking liquid from dried porcinis to sautéed cremini mushrooms, onions, and kale, then reduce the mixture with wine. The sauce is finished with some sour cream, butter, and pasta cooking liquid, then tossed with egg noodles. While this dish strays far from the classic, it still has plenty of rich flavor, plus extra toothsomeness from the greens. 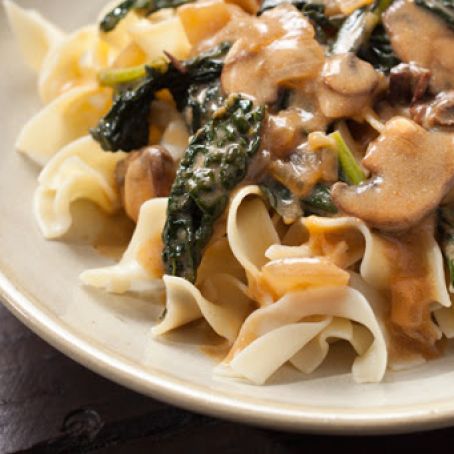 Place the porcini mushrooms in a small heatproof bowl. Bring the water to a boil in a small saucepan over high heat and pour it over the porcinis. Let the mushrooms sit until softened, about 12 minutes. Using a fork, transfer the porcinis to a cutting board (be careful not to disturb the gritty sediment on the bottom of the bowl) and coarsely chop. Transfer to a medium bowl and set aside. Leaving the sediment behind, slowly pour 1 1/2 cups of the soaking liquid into a measuring cup and set aside. Discard the remaining liquid.
Bring a large pot of heavily salted water to a boil over high heat.
Meanwhile, prepare the sauce: Heat 1 tablespoon of the oil in a large frying pan over medium-high heat until shimmering. Add the cremini mushrooms and cook, stirring rarely, until browned, about 5 minutes. Remove to the bowl with the porcinis.
Reduce the heat to medium, add the remaining oil to the pan, and heat until shimmering. Add the onion and paprika and cook, stirring occasionally, until the onion has softened, about 4 minutes.
Sprinkle in the flour and cook, stirring occasionally, until the raw flavor has cooked off, about 1 to 2 minutes. Add the kale and garlic, season with salt and pepper, and cook, tossing with tongs, until the kale is just wilted, about 1 minute.
Add the reserved mushrooms along with any juices in the bowl and stir to combine. Add the wine and cook until almost evaporated, about 3 minutes. Reduce the heat to low, add the reserved mushroom soaking liquid, season with salt and pepper, and cook until the sauce is slightly thickened, scraping up any bits that have accumulated at the bottom of the pan, about 5 to 7 minutes. Meanwhile, cook the noodles in the boiling water according to the package directions.
When the noodles are ready, reserve 1/3 cup of the cooking liquid. Drain the noodles and return them to the pot; set aside.
Add the reserved pasta cooking liquid to the pan with the kale-mushroom sauce and simmer until thickened, about 2 minutes. Add the butter and stir until melted and combined. Remove the pan from the heat and stir in the sour cream. Taste and season with salt and pepper as needed. Serve the sauce immediately spooned over the noodles. 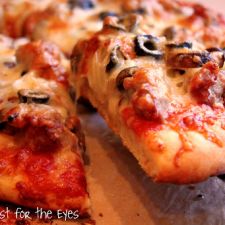