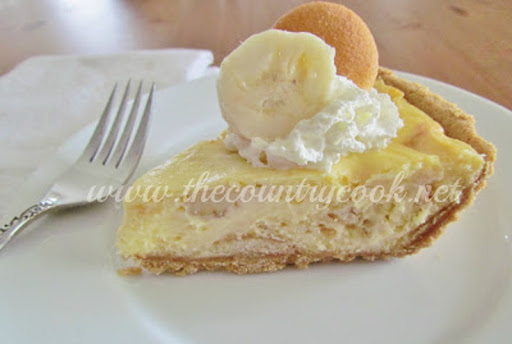 In the bowl of your stand mixer (or using a handheld electric mixer), combine cream cheese and sugar until smooth (about 2 minutes on medium speed).

Add in eggs and mix until combined.

In a separate bowl, mash up your bananas. I just use my potato masher.
Squeeze in the juice from the lemon (watch out for the seeds!)

The lemon juice will keep your bananas from browning too quickly but also add a bit of flavor to the cheesecake.

Add the powdered instant pudding and the mashed bananas to the cream cheese mixture.

If you are using a stand mixer, it's really important that you scrape down the sides of your mixing bowl often.

Mix until combined. Batter will be thick.

Put vanilla wafers into ziploc bag, and crush using your hands or a rolling pin.

You want to leave some of them chunky so that you'll see bits of wafer in the cheesecake when you cut into it.

It'll be a pit puffy when you first take it out of the oven.
Don't worry, it'll all settle down as it cools.

Allow cheesecake to cool for several hours in the fridge before serving.

A great way to serve this is to top each slice with a little squirt of whipped cream and a slice of banana and vanilla wafer on top.

Cook's Notes: This cheesecake can be made without the bananas. The instant pudding gives this cheesecake a lot of banana flavor so if you skip the mashed banana step, you'll still have a great tasting cheesecake. Also, I looked everywhere for one of those premade Nilla Wafer crusts. None of my local stores seem to carry them right now.
But if you can find them near you, I think it would taste wonderful with this recipe.

Just remember though that this recipe is made for a larger pie crust so you'll have filling leftover when you use a smaller crust. 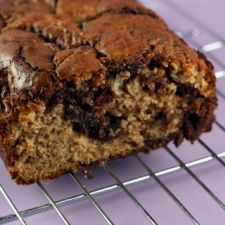