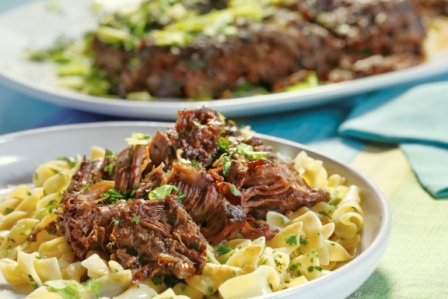 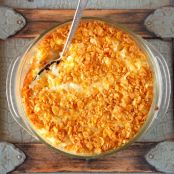 2. Pat dry the chunk of meat with paper towels - important as the salt and pepper won't stick to the meat if it is not dry and you won't be able to get a good sear on it. Be very generous with your salt and freshly ground black pepper. Make sure the meat is covered. Put your flour in a large bowl and roll the entire piece of meat in the flour to coat it. Take the meat out of the bowl, place it on your cutting board and LITERALLY pound the flour left in the bowl INTO the meat. Yes, it may sound strange but this is Swiss Steak! Good Swiss Steak is dependent on this rather large amount of flour cooking for hours and absorbing the fat from the meat as it renders itself in the oven for approximately 3 hours or so.

3. Place the oil and butter or bacon fat in a heated large Dutch oven or any baking pan you have with a cover that fits well. Put your sliced onions into the hot pot and slowly cook until caramelized, about 6-8 minutes. Salt and pepper the onions. During the last few minutes add the garlic. Cook another 2 minutes. Transfer onion mixture to bowl and set aside.

4. Using same pot, add a little more olive oil and place on high heat. When hot, lower the meat into the pot carefully to brown (don't splash yourself with the hot fat). Don't move the meat until you are sure the first side is brown and has developed a crust, about 8-10 minutes. With tongs, flip over the meat. Again lower meat gently and brown this side, another 6-8 minutes. You may have to regulate the heat turning it down a tad. You don't want to blacken the flour, just a deep golden brown.

6. Place cover on the pot and put into oven. Slowly braise for at least 2- 3 hours, checking your liquid level and whether you can easily pierce the meat with a skewer.

7. Transfer to a heated platter spoon the remaining sauce from the pan over the meat. Garnish with chopped parsley and celery leaves. Serve immediately with seasoned egg noodles. 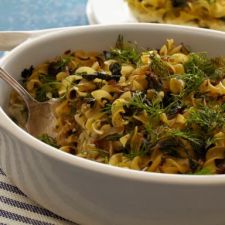