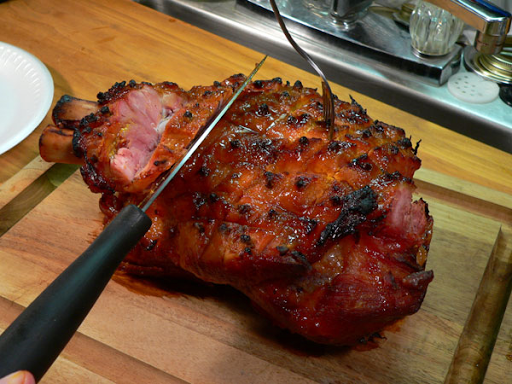 Any leftovers will make great sandwiches. Save the bone once you've picked it clean. Wrap it in foil and store in the freezer. It's a great way to season up a big old pot of soup!

Place the whole pork shoulder package in the pan.

Remove any other packing materials that might be included.

Leave the netting on the meat, do not remove at this time.

Place the meat skin side up in the pan. Add one cup of water to the pan. Cover the meat with aluminum foil.

Place in oven on middle rack. Meat should cook about 18-22 minutes per pound of weight.

In a small bowl, add the light brown sugar. Add yellow mustard and a few tablespoons of the juice from the sliced pineapples. Stir until it forms a thick paste.

About 45 minutes before the pork should be done, remove the pan from the oven and remove foil.

Carefully cut away the netting from around the meat. It may stick in some places so be careful.Using tongs and a knife, carefully remove the layer of skin and fat from the meat. Set aside.

Use a sharp knife and score the meat about every one inch and about ½ inch deep. Crosscut again.

If using cloves, place one clove in each of the squares made from the cuts. Drizzle half of the glaze over the cooked meat.

Use toothpicks to attach the pineapple slices to the meat and drizzle remaining glaze over the top.

Return the meat to the oven, uncovered and bake for about 30-45 minutes or until a meat thermometer placed in the thickest part of the meat reaches a temperature of 170º F.

EXTRA GLAZE: OPTIONAL
I decided to add some extra glaze to my ham, it's not necessary, just a matter of preference.

Remove the toothpicks, pineapple and cloves. Spread a thin layer of mustard all over the baked shoulder. Sprinkle an even coating of brown sugar on top of that. Set your oven to BROIL.

Return the shoulder, uncovered, to the oven and Broil for about 10 minutes longer or, until it's a nice brown color. Sugar should be melted but don't let it burn. Oven temperatures will vary so, keep a close eye on it during this final step.

Remove from oven and let stand for 5-15 minutes before carving. 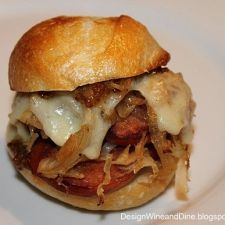