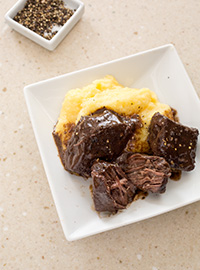 Tuscan beef stew (peposo), a stew made by the tilemakers of Florence's famous Santa Maria del Fiore Cathedral Duomo, is a simple stew of beef braised in wine, with loads of peppercorns and a head of garlic cloves. To improve the texture and flavor of ours without veering too far from the original, we added tomato paste and anchovies for meatiness, powdered gelatin for body, and shallots, carrots, and herbs for complexity. To ensure a full-bodied wine flavor, we add some wine at the beginning of the long braise, more before reducing the sauce, and a small amount at the end. And we did the same with the peppercorns: cracked pepper at the start, ground pepper toward the end, and more cracked pepper on serving. 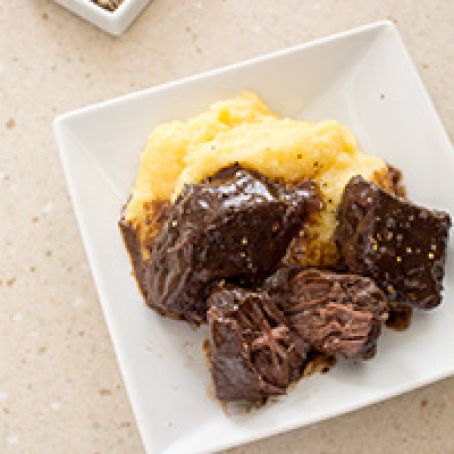 We prefer boneless short ribs in this recipe because they require very little trimming. If you cannot find them, substitute a 5-pound chuck roast. Trim the roast of large pieces of fat and sinew, and cut it into 2-inch pieces. If Chianti is unavailable, a medium-bodied wine such as Côtes du Rhône or Pinot Noir makes a nice substitute. Serve with polenta or crusty bread.

1. Toss beef and 1 1/2 teaspoons salt together in bowl and let stand at room temperature for 30 minutes. Adjust oven rack to lower-middle position and heat oven to 300 degrees.

4. Add 1 cup wine and ground black pepper and bring mixture to boil over medium-high heat. Simmer briskly, stirring occasionally, until sauce is thickened to consistency of heavy cream, 12 to 15 minutes.

5. Combine remaining wine and cornstarch in small bowl. Reduce heat to medium-low, return beef to pot, and stir in cornstarch-wine mixture. Cover and simmer until just heated through, 5 to 8 minutes. Season with salt to taste. Serve, passing extra cracked peppercorns separately. (Stew can be made up to 3 days in advance.)
Cheap Wine is Fine

Early recipes for peposo relied on inexpensive Chianti, while modern versions call for a midpriced bottle (whether Chianti or a similar Tuscan wine such as Montepulciano or Brunello). We made batches using cheap ($5), midpriced ($12), and pricey ($20) Chianti, along with other varieties we often use in the kitchen: Cabernet Sauvignon, Pinot Noir, and Côtes du Rhône.

We were surprised that the stew made with the cheapest Chianti went over well with most tasters. While the midpriced wine was agreeable to everyone, there was no advantage to cooking with the expensive bottle. Highly oaked, tannic wines like Cabernet became harsh when cooked, but cheap bottles of fruitier pinot and Côtes du Rhône made good stand-ins for the Chianti.

Maximizing the Flavors from Wine and Pepper 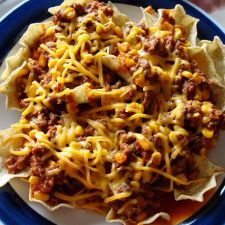