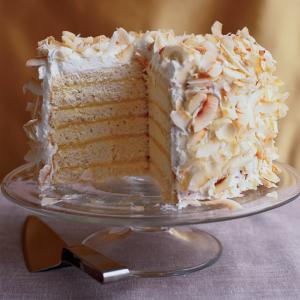 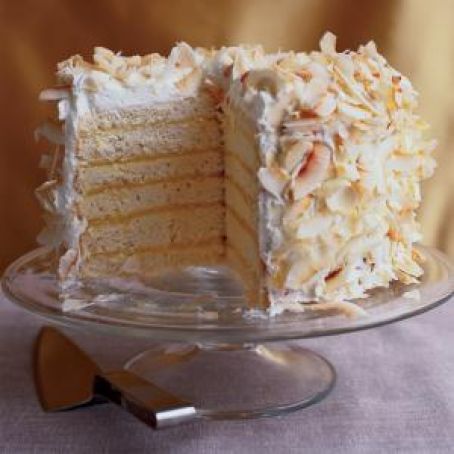 Preheat the oven to 350°. Line the bottom of three 8-inch round cake pans with parchment paper and spray with nonstick cooking spray.
In the bowl of a stand mixer fitted with the paddle, mix the flour, sugar, baking powder and salt at low speed. Mix in the butter, coconut milk, water and vanilla until combined. Scrape down the bowl and beat at high speed until very smooth, 2 minutes.
In a medium bowl, using an electric mixer, beat the egg whites until soft peaks form, 2 minutes. Fold half of the egg whites into the batter until incorporated, then fold in the remaining whites until no streaks remain. Divide the batter among the cake pans. Bake for about 45 minutes, until a toothpick inserted in the centers comes out clean. Cool the cakes in the pans on a rack for 15 minutes, then invert them and let cool completely, about 2 hours.
In a saucepan, whisk the sugar and cornstarch. Whisk in the passion fruit nectar, egg yolks and vanilla seeds and cook over moderate heat, stirring constantly, until thick, 6 minutes. Remove from the heat; whisk in the butter, 1 tablespoon at a time, until incorporated. Scrape the filling into a glass bowl, press a sheet of plastic wrap on the surface and refrigerate until chilled, about 2 hours.
Using a serrated knife, cut each cake in half horizontally to create 6 layers. Set one layer on a cake plate. Spread with 6 tablespoons of the filling. Repeat with the remaining 5 cake layers and filling, ending with a layer of cake. Refrigerate until firm, 1 hour.
Spread the coconut on a large rimmed baking sheet. Bake for 5 minutes, stirring once, until lightly toasted. Let cool. In a large bowl, using an electric mixer, beat the cream with the sugar until medium-firm peaks form.
Frost the top and side of the cake with the whipped cream and coat with the coconut. Refrigerate for 1 hour before serving. 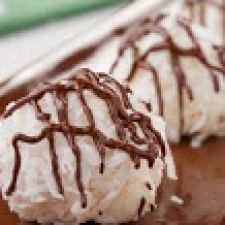