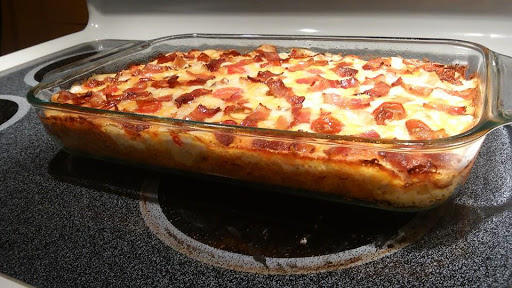 Preheat to 375
Mix all well and spread in a greased 9x13 pan.
Top with your favorite toppings! I used Alfredo sauce, grilled chicken breast, bacon, and sliced cherry tomatoes. And covered it in cheddar and mozzarella smile emoticon
Bake for 35-40 minutes or until bottom of crust is slightly browned.

Notes:
The baking blend is a new flour blend you can order on THM's website. Its amazing! Its a FP by itself, but this recipe is made with oil and eggs so that makes in an S. But it does have almonds in it for those with allergies. If you are substituting coconut flour, i suggest only using 1 cup instead of 2 and maybe a couple tbs oat flour.
You do not prebake the crust. It holds up very well and is not eggy or weak! Yay!! I would still suggest making it with a preheated oiled pan though as stated in my edit. Also, if you want it thin, cut this recipe in half. You might have a harder time spreading it since its not elastic like traditional yeast pizza dough, but it can be done! 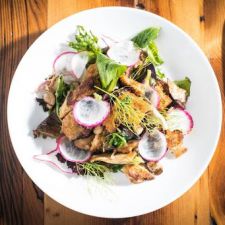