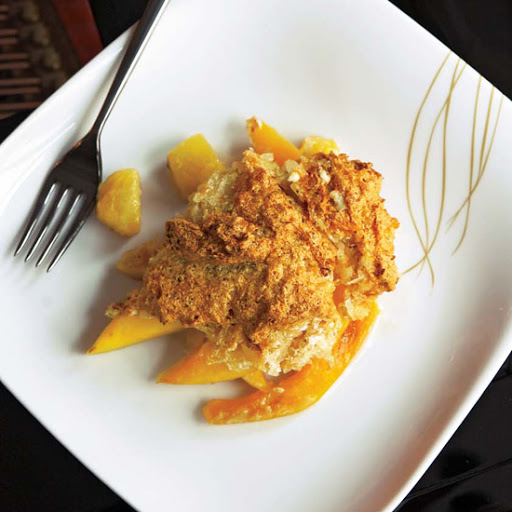 Similar to a traditional fruit cobbler recipe, but with mangoes and pineapple, and topped with shredded coconut. Let's get tropical! 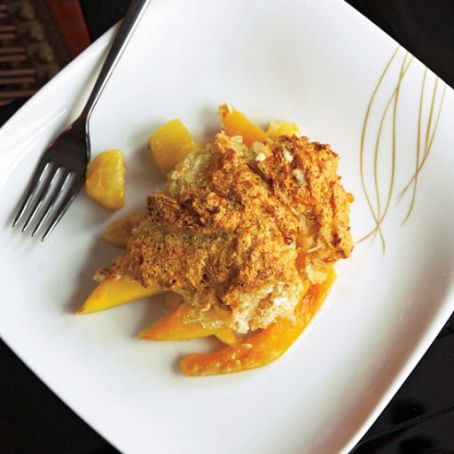 In a large bowl, toss the mangoes and pineapple with 1/2 cup of the sugar and let stand for 30 minutes.

Meanwhile, preheat the oven to 325°F. Spread the coconut on a baking sheet and toast for about 8 minutes, stirring occasionally, until golden and fragrant. Let cool.

In each of 2 large skillets, heat 1 tablespoon of the canola oil until shimmering. Divide the mangoes and pineapple between the skillets and cook over high heat, stirring and shaking the skillets, until the fruit is slightly softened, about 5 minutes. Add 2 tablespoons of the thick coconut cream to each skillet and stir until melted. Transfer all of the fruit to a 3 1/2- to 4-quart shallow baking dish.

In the bowl of a standing electric mixer, beat the egg whites at medium-high speed until soft peaks form. With the machine on, gradually beat in the remaining 3/4 cup of sugar until the whites are firm and glossy, about 3 minutes. Using a large rubber spatula, fold in the toasted coconut and ground almonds.

Spoon 1/4-cup mounds of the macaroon mixture over the mangoes and pineapple, leaving little gaps here and there. Bake the fruit cobbler for about 45 minutes, until the fruit is bubbling and the macaroon topping is browned and firm. Transfer the cobbler to a rack and let cool completely before serving, about 3 hours. 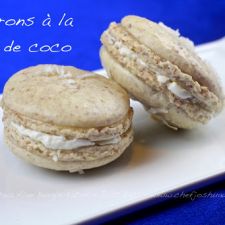