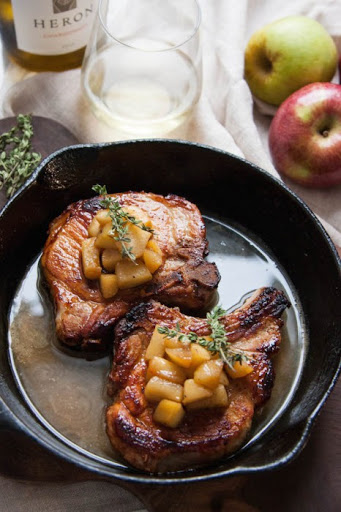 This meal is super impressive, and not too difficult to pull off. It just requires some planning ahead for the brine, which makes the pork chops juicy and flavorful! 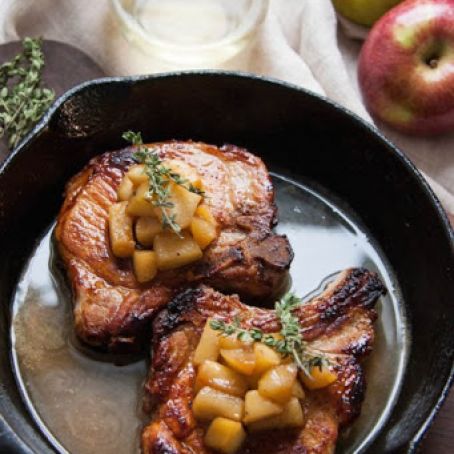 BRINE:
In a medium bowl whisk together the apple cider, salt and brown sugar. Continue mixing until the salt and sugar are completely dissolved. Pour the brine in a large resealable plastic bag, along with the pork chops. Seal and refrigerate for at least 4 hours, though preferably overnight.

Preheat the oven to 400 degrees F.

PORK CHOPS & PAN SAUCE:
Remove the pork chops from the brine. Discard the liquid. Pat the meat dry and season both sides with salt and pepper. Heat 1 tablespoon of olive oil in a large cast iron, or oven-safe skillet, over medium-high heat. When the oil is very hot (you'll notice ripples in the oil), but not yet smoking add the pork chops to the pan. Cook until there's a good sear and the meat is browned, 3-5 minutes. Use tongs to flip the meat, and cook for another 3-5 minutes to sear the other side.

Transfer the pan to the oven and cook for 10-15 minutes, depending on the thickness of the pork chops. The most accurate measure of doneness is to test the temperature of the meat, which should be at 145 degrees F. When the meat is completely cooked remove the pan from the oven, and transfer the pork chops to a plate.

Add 1/4 cup apple cider and 3/4 cup of chicken stock to the same pan you used to cook the pork, and cook over high heat, scraping the bottom of the pan. Bring the liquid to a boil and cook until it's reduced by at least half. Taste and season with additional salt and pepper, if necessary.

To serve, divide the pork chops between plates, top with apples and spoon the pan sauce over the meat. 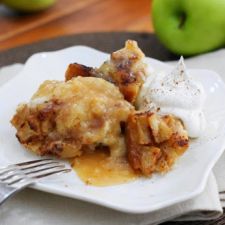