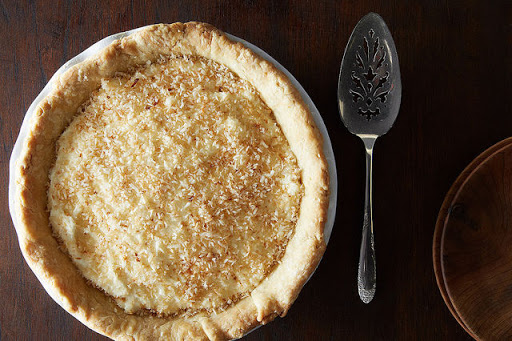 Food52 Review: This coconut cream pie is full of natural goodness. I love how it is full of coconut flavor, yet not too sweet, and the pie is really easy to make. Next time, I will cut the salt in the crust to perhaps 1/2 teaspoon only. The pie is delicious and has a great coconut flavor due to the canned coconut milk and the homemade sweetened coconut. I will definitely make this again! (less) - Robin Burton Fenner 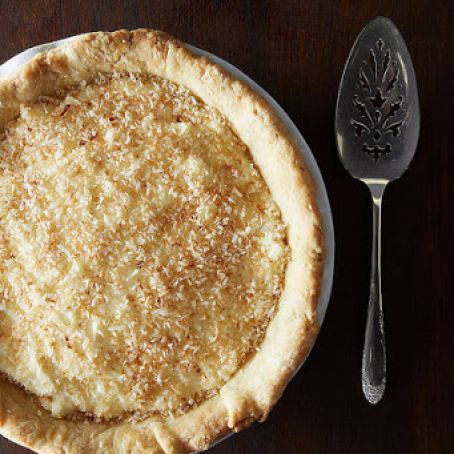 1. Preheat the oven to 350. In a medium mixing bowl, whisk together the sifted flour and salt. Pour in the oil and milk, and using a fork, stir to combine. When the dough comes together, roll it out between two sheets of waxed paper, peel off the top sheet, and invert the crust over and into a deep-dish pie plate. Press the crust in and all the way up the sides, and trim off the excess.

2. Fill with pie weights or line with foil topped with dried beans, and bake until golden and set, 25 to 30 minutes. Let cool completely.

3. While the pie crust is cooking and cooling, make the sweetened coconut: In a medium mixing bowl, toss together the shredded coconut and the sifted powdered sugar until well combined. In a separate small bowl, stir together the oil and water until well combined and then pour over the sugared coconut. Stir gently to coat the coconut completely. Let sit for about 10 minutes, stirring and fluffing occasionally. The original amount will expand slightly in size. Refrigerate the sweetened coconut until you need it.

1. Toast 2/3 cups of your sweetened coconut in a small, heavy skillet over medium heat until lightly browned, stirring occasionally, about 3 minutes. Let cool completely while you make the pastry cream.

2. Whisk together 1/2 cup of sugar, the eggs, egg yolk, and flour in a medium bowl and set aside (but near the stove). In a medium saucepan set over medium heat, bring 1 1/2 cups of coconut milk and 1 1/2 cups of your sweetened coconut to a simmer. Gradually add this hot milk mixture to your egg mixture, whisking constantly.

3. Return everything to the same saucepan; cook until pastry cream thickens and boils, stirring constantly, about 4 minutes.

4. Remove from heat. Mix in the vanilla extract. Transfer pastry cream to a medium bowl. Cover with plastic wrap, pressing it directly onto the surface to prevent formation of skin. Chill until cold, at least 2 hours.

5. When cold, transfer the filling to your prebaked, now-cool crust. Cover and chill while you make the topping.

6. Using an electric hand mixer, beat the cream, the remaining 1/4 cup coconut milk, and the remaining 2 tablespoons of sugar in a medium bowl until peaks form. Spread whipped cream all over the top of pastry cream filling. Sprinkle evenly with cooled toasted coconut. Cover and refrigerate at least four hours, but preferably overnight. 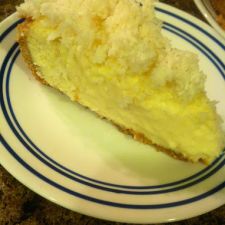