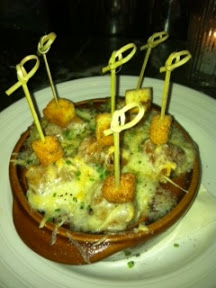 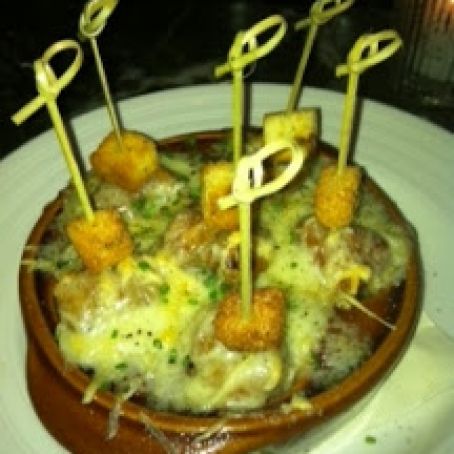 Soup:
1. Adjust oven rack to lower-middle position and heat oven to 400 degrees. Generously spray inside of heavy-bottomed large (at least 7-quart) Dutch oven with nonstick cooking spray. Place butter and olive oil in pot and add sliced onions (slice in half moons) and 1 teaspoon salt. Cook, covered, 1 hour (onions will be moist and slightly reduced in volume). Remove pot from oven and stir onions, scraping bottom and sides of pot. Return pot to oven with lid slightly ajar and continue to cook until onions are very soft and golden brown, another 1 1/2 to 1 3/4 hours longer, stirring onions and scraping bottom and sides of pot after 1 hour.

2. Remove pot from oven and place over medium-high heat on stove. Cook onions, stirring frequently and scraping bottom and sides of pot, until liquid evaporates and onions brown, 15 to 20 minutes, reducing heat to medium if onions are browning too quickly. Continue to cook, stirring frequently, until pot bottom is coated with dark crust, 6 to 8 minutes, adjusting heat as necessary. (Scrape any fond that collects on spoon back into onions.) Stir in 1/4 cup water, scraping pot bottom to loosen crust, and cook until water evaporates and pot bottom has formed another dark crust, 6 to 8 minutes. Repeat process of deglazing 2 or 3 more times, until onions are very dark brown. Stir in sherry and deglaze, stirring frequently, until sherry evaporates, about 5 minutes.

3. Stir in broths, 2 cups water, thyme, bay leaf, and 1/2 teaspoon salt, scraping up any final bits of browned crust on bottom and sides of pot. Increase heat to high and bring to simmer. Reduce heat to low, cover, and simmer 30 minutes. Remove and discard herbs, then season with salt and pepper, and let cool/rest.

Pour soup mixture into pan/container that will make it easy for frozen slicing the next day. Line container with parchment paper to help frozen product remove easily. Freeze until solid, at least 4 hours, but preferably overnight. If your stock does not get solid, add gelatin, and follow the instructions like you were making jello.

Remove soup from the pan/container, cut the soup into cubes, each about 3/4 to 1 square inch.

Fold one corner up to meet the opposite corner, and press the sides of the triangle together. Take the other two sides, and bring them up to the central point, and twist, forming a little beggar's purse/dumpling. Squeeze out all possible air.

Steam the dumplings immediately on the stove by taking a large boiling pan and filling it with water to just below the height of your cookie cutters. Place a cookie cutter on the surface, followed by a pie tin, sprayed with nonstick cooking spray, along with with numerous slits in it to allow the steam to flow upward. Place subsequent cookie cutters inside pie tins, and stack to the top. You should be able to stack 3 tins high, with about 6 dumplings per tin. Cover and steam for 15 minutes.

Remove and place each dumpling in one of the depressions of an escargot dish, and sprinkle the top with a healthy layer of gruyere cheese. Pad the cheese with melted butter. Place the dish under the broiler for a few minutes until the cheese is melted & bubbly around the edges, about 3-5 minutes.

Remove dumplings from broiler, skewer one crouton on each toothpick & then skewer each dumpling with a toothpick as prepared. Garnish with chopped chives & thyme.

Let cool for a minute or two tops, as both the cheese and broth will be quite hot. Serve and enjoy. 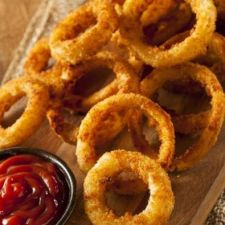