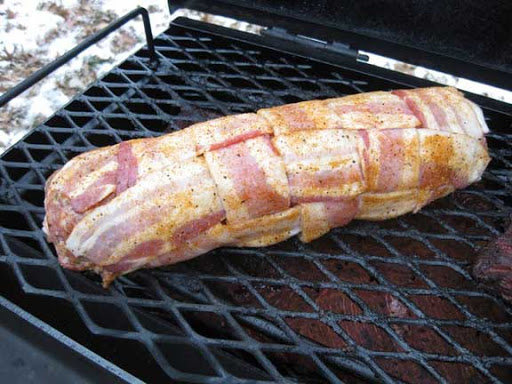 Warning: approach recipe with caution! Do not attempt to eat this all by yourself! There is no such thing as "too much bacon," but this recipe tests the limits! 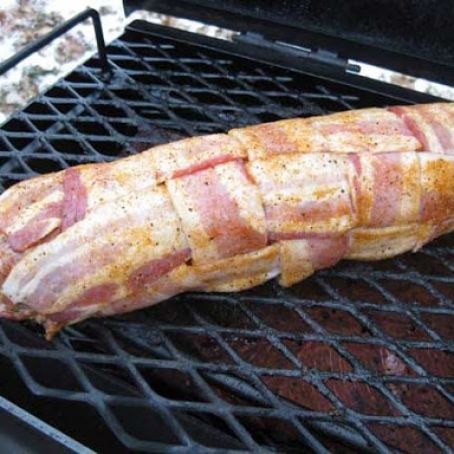 Using 10 slices of bacon, weave a square lattice on top of a pie: first, place 5 bacon slices side by side on a large sheet of aluminum foil, parallel to one another, sides touching. Place another strip of bacon on one end, perpendicular to the other strips. Fold first, third and fifth bacon strips back over this new strip, then place another strip next to it, parallel to it. Unfold first, third and fifth strips; fold back second and fourth strips. Repeat with remaining bacon until all 10 strips are tightly woven.

Preheat oven to 225°F or light a fire in an outdoor smoker. Place remaining bacon in a frying pan and cook until crisp. As it cooks, sprinkle bacon weave with 1 tablespoon barbecue rub. Evenly spread sausage on top of bacon lattice, pressing to outer edges.

Crumble fried bacon into bite-size pieces. Sprinkle on top of sausage. Drizzle with 1/2 cup barbecue sauce and sprinkle with another tablespoon barbecue rub.

Very carefully separate front edge of sausage layer from bacon weave and begin rolling sausage away from you. Bacon weave should stay where it was, flat. Press sausage roll to remove any air pockets and pinch together seams and ends.

Roll sausage toward you, this time with bacon weave, until it is completely wrapped. Turn it so seam faces down. Roll should be about 2 to 3 inches thick. Sprinkle with remaining barbecue rub.

Place roll on a baking sheet in oven or in smoker. Cook until internal temperature reaches 165 degrees on a meat thermometer, about 1 hour for each inch of thickness. When done, glaze roll with more sauce. To serve, slice into 1/4 to 1/2-inch rounds. 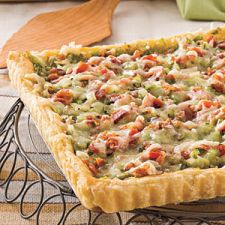