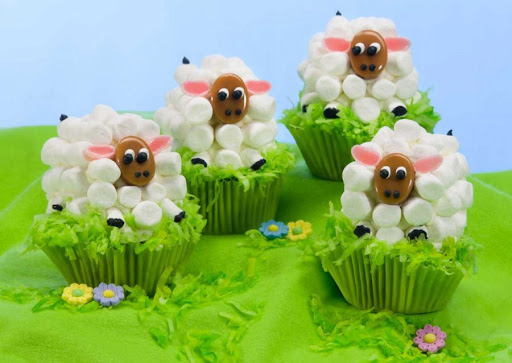 Underneath the lamb is a moist carrot cupcake with a bed of green coconut grass. You can get creative when making the fluffy friends by using different types of candy for the faces and eyes. 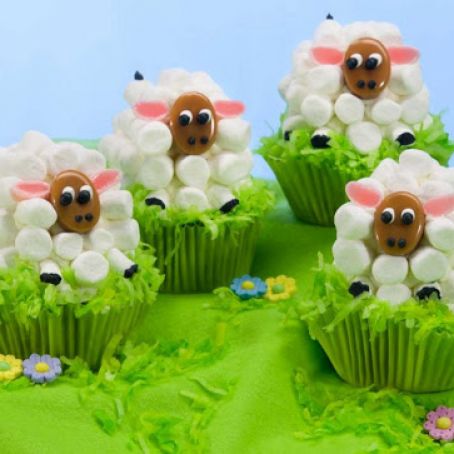 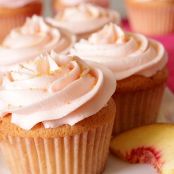 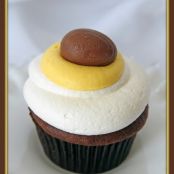 Place 16 cupcake liners in a cupcake or muffin tin and set aside.
Sift together flour, baking soda, cinnamon and ginger and set aside.

In a large bowl whisk together eggs and vegetable oil until well blended.

Add carrots, pineapple and nuts and combine well. Stir in flour mixture.
Scoop into the paper cups about 2/3 full. (Depending on the size of cups you may be able to make more.)

Place in oven and bake until center of the cupcakes bounce back when lightly pressed with a finger or an inserted toothpick comes out clean, about 23 minutes. Allow to cool before frosting.

Place coconut in a bowl and add one drop of green food color, mix by (gloved) hand until color is well distributed. (Add a touch of yellow if green color is too harsh.)

Fill a piping bag or food storage bag fitted with a medium round decorating tip with cream cheese frosting.

Prepare 2 small paper piping bags, set aside and prepare royal icing. (Our royal icing recipe will result in more than you need for just these cupcakes, so divide all ingredients in half when preparing so you won't have as much extra icing left over.) Fill a piping bag with white royal icing. Take about 3 tablespoons white royal icing, make it black and fill into piping bag. Set aside.

Using cream cheese frosting pipe a generous circle of frosting onto a cupcake.

Press green coconut onto the edges of cupcake.

For ears: Cut a pink jelly bean lengthwise in half. Pinch beans to make pointy. Place next to the head and use a little cream cheese frosting to make them stick.