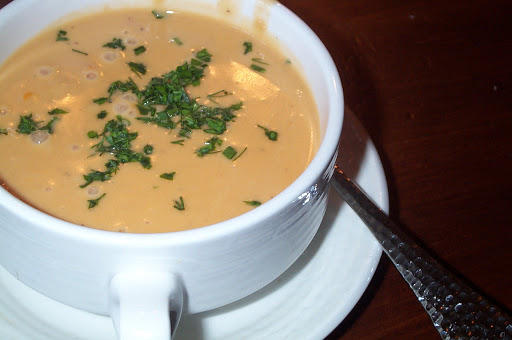 The best of the ocean-and the kitchen-fits in one little bowl. As rich and delicious as lobster can be, it's a bisque that beats all. 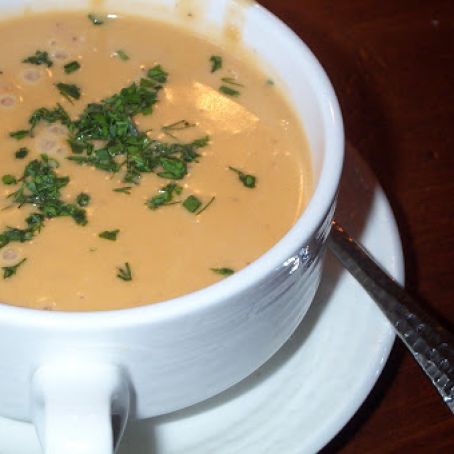 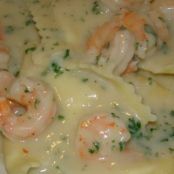 Prepare lobster by cutting in half lengthwise through the head and body first.

Remove tail halves, and claw and knuckle sections. These are the sections with the meat for the bisque. Cut the body into two-inch pieces.

Heat oil on medium high heat in a four-quart stock pot and add the chopped onions, garlic, shallots, carrots, celery and all of the lobster.

Cook on medium to medium-high heat, stirring continually for 10-12 minutes or until the lobster shells start to turn red.

Deglaze the pan with the sherry.

Cook, stirring for another 5 minutes.

Place the water and heavy cream into the pot and bring to a boil.

Remove lobster meat from cooled lobster and reserve for the final presentation.

Add the remaining shells to the creamy stock.

Let simmer and reduce by 25 percent.

In a separate three-to-four-quart pot, melt butter on medium heat.

Stir in flour with a wire whisk to make a roux.

Lower heat and slowly cook the flour and butter for about five minutes.

The roux should be blond in color and have a buttery aroma.

When the creamy stock is reduced, strain into the pot with the roux, and whip with a wire whisk.

Discard the shell and vegetable mixture.

Chop the lobster meat into half-inch pieces and stir into bisque.

Salt and pepper to taste.

Portion bisque into your favorite cup or bowl, and garnish with chopped chives.

Adding a touch of brandy or sherry to the stock can bring a wonderful touch to this classic preparation. 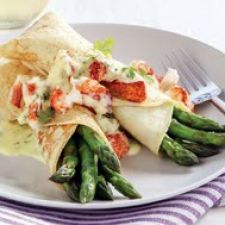