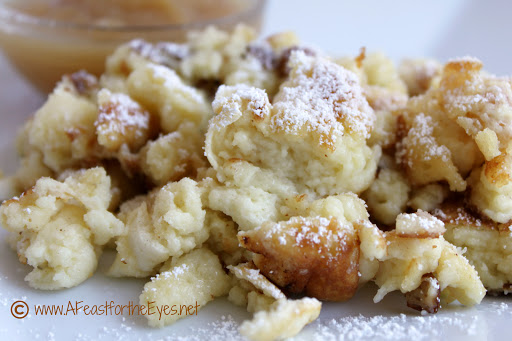 Kaiserschmarrn or Kaiserschmarren is a shredded pancake, which has its name from the Austrian emperor Franz Joseph I, who was very fond of this kind of fluffy shredded pancake. It's a light and fluffy "pancake" that is perfect for Brunch-- or even as a light evening meal. In Bavaria, it is often served with a plum compote. We like ours lightly dusted with powdered sugar and with homemade apple sauce, on the side. Either way, it's easy to make and delicious! 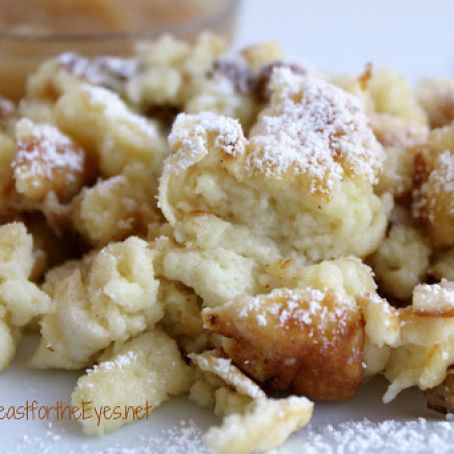 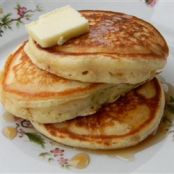 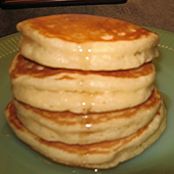 Mix the flour, milk, egg yolks, salt, melted butter and 1 tablespoon sugar into a smooth batter. Cover and let rest 30 minutes for the flour to swell.

Beat the egg whites with 1 tablespoon sugar until stiff and gently fold into the batter.

Melt the clarified butter in a non-stick pan; pour the batter in, cover and cook.

Once the underside of the pancake has turned golden, turn it over and continue to cook uncovered until the other side has also turned golden brown.

Cut up into bite-sized pieces. Sprinkle the pancake, while still hot, with powdered sugar or a mixture of cinnamon sugar.

Tips and hints: Kaiserschmarrn is even more delectable if you caramelize the powdered sugar in the pan instead of dusting it on afterwards. Just free up a corner of the pan when cooking the Kaisershmarrn and sprinkle in 1 to 2 teaspoons powdered sugar. Once the powdered sugar has caramelized, which will happen very quickly, move the pancake back over it and spread it all around.

Strained pears, applesauce or plum compote is the traditional accompaniment. 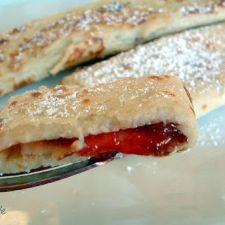