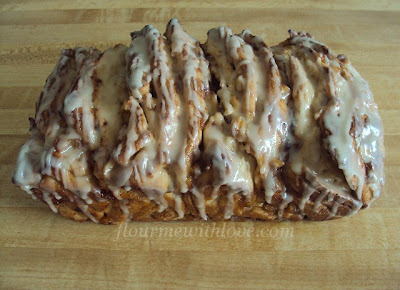 If you like apple fritters then you'll love this bread! I tried rolling the dough, like cinnamon bread, however the texture wasn't right. So even though this may look somewhat complicated to make, it's not. You get all the flavors of an apple fritter, the texture and the wonderful glaze baked into one big bread. We ate ours warm and it is delicious! 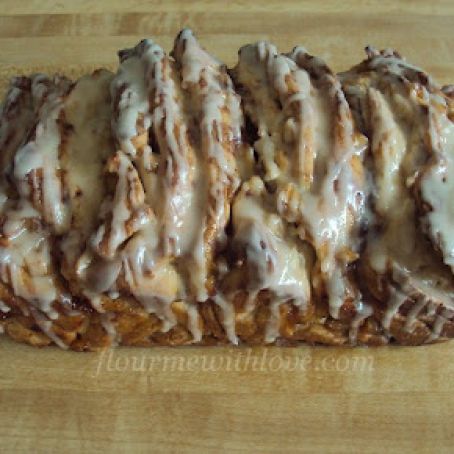 In a skillet, cook apples, lemon juice, brown sugar, vanilla, butter, cinnamon & cornstarch until mixture is thickened. Set aside to cool.
Heat the milk in a small saucepan until it bubbles; remove from heat. Add the butter and stir until melted; set aside.
Put flour, yeast, brown sugar and salt in a bowl, mix well.
Add the water, egg and milk/butter mixture.
Mix until dough forms into a ball; knead for an additional five minutes.
On a well floured surface, roll dough into a rectangle.


Cut dough into even squares (I got 20 from my dough).

Carefully stack pieces of dough onto each other forming four piles. (use a spatula, it makes stacking much easier!)


Mix butter, vanilla and powdered sugar into a bowl. Add half & half; stir until you get a creamy consistency.
Pour on glaze and allow to setup for a few minutes.


Pull some apart and enjoy! 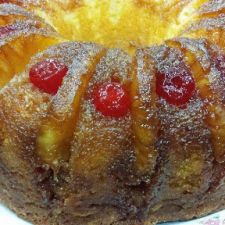