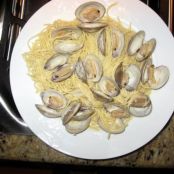 In a large dutch oven, heat the salt pork until the fat melts. Add the onions. Cook over gentle heat until very soft.

Add the clam juice, potatoes, seasonings, tomato puree and a little water. Simmer until the potatoes are soft, then add the quahogs. Heat and taste for seasoning. Add water if needed. It is best to use old, not new, potatoes, because they thicken the chowder with their starch.

Crush some pilot crackers and stir them into the chowder to thicken it further, near the end of the cooking. Happy Eating.

The main item on the menu was Rocky Point Clam Chowder which was prepared according to the shore dinner hall's owner's well kept secret recipe. The diners were seated at both sides of very long tables as they arrived, usually in groups (there was no preferential seating) and the hot chowder was brought in in large metal pots and placed on the tables about six feet apart -- about 50 pots to each table. The chowder was served with hot "Rocky Point Clam Cakes" (see recipe), sweet corn and watermelon. Beer and soft drinks were available for purchase nearby.