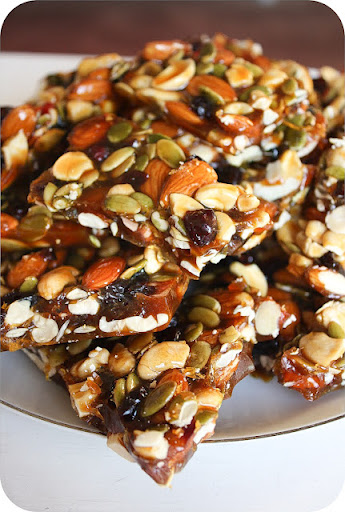 Several weeks ago I tried a new snack from Costco called "Cashew Clusters" and became completely obsessed with it. It is amazingly and utterly delicious! They're these kind of granola chunks with cashews, pumpkin seeds and almonds in them. I decided to try to make a brittle using mostly the same ingredients, but added some dried cranberries as well to boost the healthiness of the candy. I had never made brittle before, so I was quite surprised at how long it took for the sugar mixture to reach the "hard crack" stage (almost an hour!). It turned out wonderfully and makes for a good candy that you don't have to feel guilty about eating, since it has a lot of vitamins aside from the sugar and honey. I decided to call it Autumn Brittle because the pumpkin seeds and dried cranberries seemed very fall-y to me, and autumn is my favorite season and I've been missing it as of late spending my time here in Los Angeles. 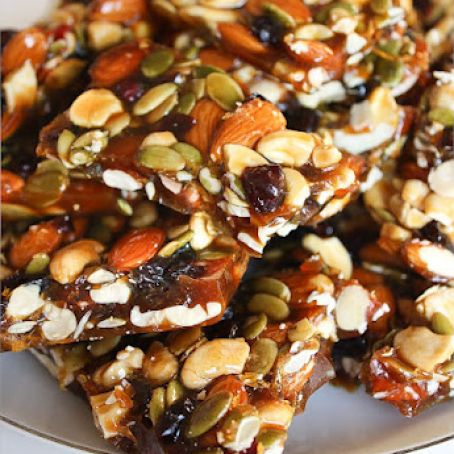 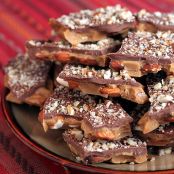 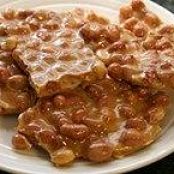 Heat the sugars, honey, water and salt in a large pot over a low-medium heat. Use a pot that is larger than you would think necessary because when the mixture begins to boil it will foam up and increase in size.

Stir every five minutes or so. Using a candy thermometer, continue to heat the mixture until it reaches a temperature of exactly 302°F. This is very important because this is the temperature at which sugar hardens into a rock-like state after it cools. Pay close attention not to go very far above 302°F, otherwise you will burn the sugar. It can take up to an hour for the mixture to reach that high of a temperature, so don't get too worried if 15 minutes go by and the thermometer is still at 175°F.

While the sugar mixture is boiling, place a sheet of parchment paper on top of a shallow pan, about 9 x 13 inches in width and length, and grease the parchment paper. Set aside.

Once the sugar mixture reaches 302°F, immediately remove it from heat and stir in the butter, cashews, almonds, pumpkin seeds and dried cranberries until they're coated in the mixture.

Immediately pour the mixture onto the parchment paper and spread it out into a large rectangle using a rubber spatula. Try to keep the surface relatively even and about 1/2 inch in height. Place the pan in the refrigerator and allow the brittle to cool for one hour. Once it has finished cooling, remove the sheet of brittle from the parchment paper and break the brittle into pieces using a meat tenderizer or clean hammer. Arrange the pieces on a serving platter and serve. Store excess brittle in a cool dry place. 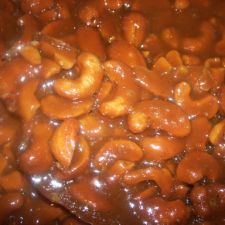