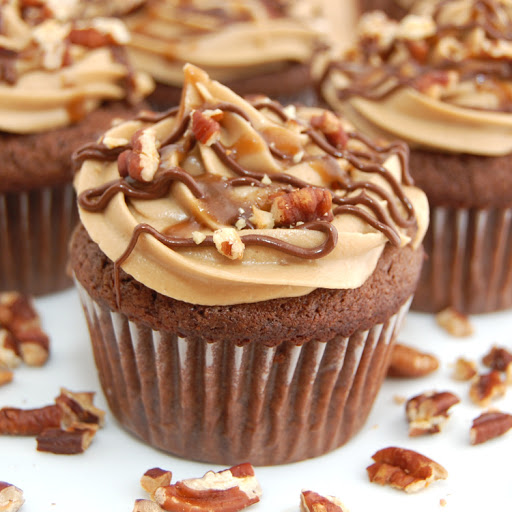 Chocolate cupcakes topped with a caramel frosting, drizzled with caramel sauce and sprinkling of chopped pecans. 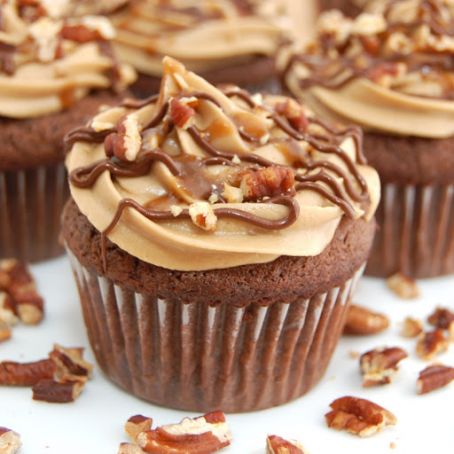 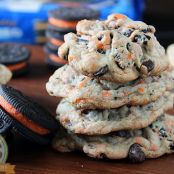 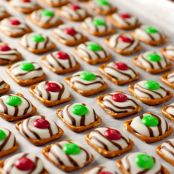 In a small bowl, sift together the flour and baking soda. Set aside.

In the bowl of a stand mixer fitted with the paddle attachment, cream together butter and sugars on medium-high speed until light and fluffy, about 3 minutes.

Add eggs one at a time, beating thoroughly after each addition. Add the chocolate, mixing until well incorporated.

Reduce the mixer to low speed and add the flour mixture in 3 batches, alternating with the buttermilk and vanilla, starting and ending with flour. Mix until just incorporated, do not over-beat.

Divide the batter evenly among muffin pan cups. Bake 20 to 25 minutes or until toothpick inserted into center of cupcakes comes out clean. Transfer cupcakes to a wire rack and allow to cool completely before filling with caramel.

Spread the 1 cup of pecans onto a baking sheet and place in preheated oven 5 to 7 minutes until fragrant. Shake the baking sheet halfway through baking so the nuts will toast evenly. Remove nuts from oven and set aside to cool completely.

Once cupcakes have cooled, use a paring knife or apple corer to cut out a small circle in the center of each cupcake. Remove the core and trim leaving the core just big enough to be used to plug the hole once it is filled.To make the cupcake filling, in a medium bowl, combine 3/4 cup chopped pecans and 1/2 cup of the cooled caramel sauce and mix to coat. Drop a spoonful of the filling mixture into each cupcake
Once the filling is in place, place the trimmed core of the cupcake back in place.

Transfer remaining caramel sauce to the bowl of a stand mixer fitted with the paddle attachment. Add the powdered sugar and beat on medium-high speed until light and fluffy, about 3 to 4 minutes. Adjust consistency with a little more milk or powdered sugar, if necessary.

Heat chocolate chips in microwave for about 30 seconds or until drizzling consistency.

Transfer the frosting to a pastry bag fitted with a decorative tip. Pipe a spiral of icing, beginning at the outer edge and working inward. Drizzle the frosted cupcakes with the reserved three tablespoons of caramel sauce, melted chocolate and garnish with remaining 1/4 cup toasted pecans. 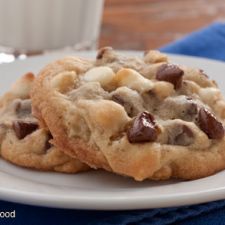