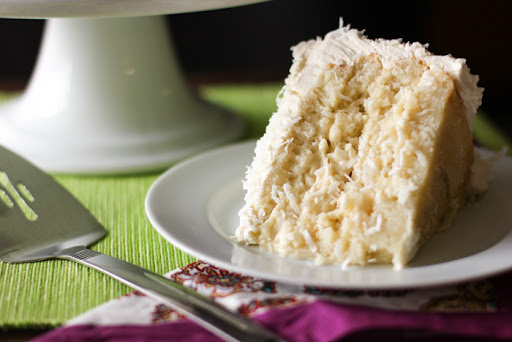 This is it. The ultimate coconut cake. Perfect white cake is drizzled with coconut syrup, filled with rich coconut pastry cream, and slathered with coconut Swiss meringue buttercream. If you love coconut, this one’s for you. 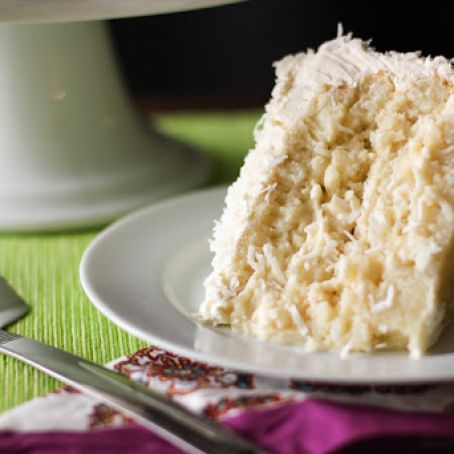 *NOTE ON TIMING: This cake has many steps, but none of them are particularly hard. For convenience, I’d split it up over 2-3 days. On the first day, bake the cake layers and let them cool before wrapping and freezing them. Make the coconut syrup and leave it covered in the fridge. On the second day, make the coconut pastry cream and frosting. Assemble the cake. Serve it then or on the third day.

Make the cake: Set oven rack in middle position. Heat oven to 350 degrees. Grease or butter/flour two 9-inch cake pans very well. Add a parchment paper circle in the bottom of each and grease that too. You don’t want your layers to stick! Pour milk, egg whites, and extracts into a small bowl and whisk gently until blended.

In a large bowl, whisk together cake flour, sugar, baking powder, and salt. Add the butter and continue beating until mixture resembles moist crumbs, with no powdery streaks left.

Divide batter evenly between two prepared cake pans and smooth the tops with a spatula before dropping it from about 3 inches high to eliminate any bubbles in the batter. Arrange pans on middle rack. Bake until a thin skewer or toothpick inserted in the center comes out with just a few moist crumbs, 23 to 25 minutes.

Let the cakes rest in pans for a few minutes before running a knife around the edges of the pan and inverting the cakes onto wire racks. Invert them again so they’ll be right-side up and let them cool completeley, about 1 1/2 hours, before wrapping in wax paper and plastic wrap to freeze until pretty firm, about 30 minutes.

Make the coconut pastry cream: Heat the coconut milk, sugar, salt and vanilla bean or extract in a medium saucepan over medium heat. In a bowl, whisk together the egg yolks and corn starch. Once the cream is hot, remove the vanilla bean (if used), scraping out any remaining seeds and returning them to the cream. Add 1/2 cup of the hot cream slowly to the yolks, whisking as you add, to temper the eggs so they won’t cook into an omelette in the middle of your pastry cream. That would be a bummer. Then pour the yolk mixture into the pot of hot cream and whisk. Continue to whisk with heat on medium-high for 3 more minutes. The mixture will turn thick and bubble. You need to continue to whisk for the full 3 minutes or the pastry cream will separate once it is cool. After the 3 minutes, whisk in the butter. Add the coconut flakes. Pour into a shallow dish to cool.

To make coconut syrup: Combine the sugar, water, and coconut milk in a small saucepan over medium heat. Bring to a boil, reduce the heat, and simmer until the sugar has dissolved, about 5 minutes, stirring occasionally. Remove the pan from the heat and allow the syrup to cool completely, about 20 minutes.

Make Coconut Swiss buttercream icing: Combine sugar and 1/2 cup water in a small saucepan and bring to a boil over medium-high heat, stirring to dissolve sugar. Boil without stirring until syrup reaches 240° on a digital thermometer, about 5 minutes.

Meanwhile, in a stand mixer with whisk attachment, beat egg whites on medium-high speed until soft peaks form. With mixer on medium speed, gradually pour in hot syrup in a thin stream; avoid pouring syrup on whisk. Increase speed to medium-high and beat until stiff peaks form and mixture is cool, about 8 minutes. Reduce speed to medium and add butter 1 tablespoon at a time, beating after each addition. (If at any time buttercream appears curdled, beat on high until smooth, then reduce speed to medium and continue beating in butter.) Once all butter is added, beat on high speed until buttercream is smooth and fluffy, about 1 minute. Beat in vanilla and coconut extract.

Assemble the cake: Carefully slice each cake layer in half with a long serrated knife. Drizzle a couple tablespoons of coconut syrup over the “inner” side (the one that seems most porous) of each layer. Spread 1/3 of the coconut pastry cream filling onto the first cake layer. Spread it almost to the edge, but pipe a thick bead of buttercream around the very outside edge of each layer to ensure no spillage. Sprinkle with flaked coconut. Repeat with the other layers. Frost the cake with a very thin crumb coat and set it in the freezer to set for about 15 minutes. Bring it out and continue frosting the rest of the cake generously. Carefully push handfuls of fluffy coconut all over the sides of the cake and on top. Keep the cake in the refrigerator, but let sit out for about 30 minutes before slicing and serving so the frosting will be soft. 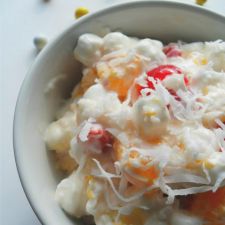