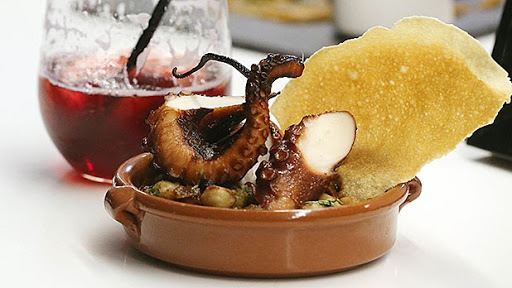 How to Prepare and Cook Octopus 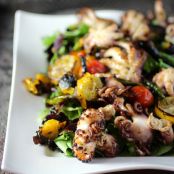 Using either a knife or kitchen shears, remove each tentacle from the octopus head. Discard the head, and cut the tentacles into a few pieces.
Add octopus to a large Dutch oven or a heavy-duty large pot, and cover with water and salt. Bring to a boil over high heat.
Cover, and reduce to medium-low to low heat so liquid is simmering. Let octopus cook for 2 to 3 hours until very tender. (To check, remove an octopus tentacle and cut it with a knife.)
Remove octopus tentacles from liquid, transfer to a container, and drizzle 2 tablespoons olive oil over it. Refrigerate until ready to serve.
When ready to serve, add tomatoes, cucumbers, and red onion. Drizzle with vinegar, remaining 1½ tablespoons olive oil, salt, and pepper, tossing to combine.
Cut octopus tentacles into pieces, and grill until slightly charred (just a few minutes per side). If you don’t have a grill, warm a large nonstick sauté pan over high heat with ½ tablespoon olive oil and sauté until octopus is warmed and slightly charred, a few minutes per side.
Divide salad between the plates and top with octopus. Serve.