Pan Seared Arctic Char And Mussels In Broth With Posole 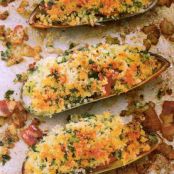 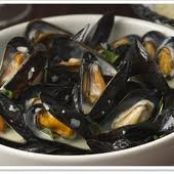 Green Garlic Butter: Place butter, garlic and cilantro in a food processor and process until smooth. Season with salt and pepper.

Pan Seared Char: Heat olive oil in a large saute over high heat until almost smoking. Season char with salt and pepper and sear, skin-side down, until golden brown, about 2 to 3 minutes. Turn over and continue cooking for 3 to 4 minutes or until just cooked through.

Bring fish stock to a simmer, add the tomatoes and cook for 10 minutes. Place the mixture in a food processor and process until smooth.

Put the mixture into a clean saucepan and bring to a boil. Add the mussels and cook until all the mussels have opened, discarding any that do not.

Remove the mussels to a bowl. Whisk a few tablespoons of the butter into the tomato broth and season with salt and pepper. Add the mussels back to the broth. Stir in posole.

Assembly: Place 1 char fillet in the center of each shallow bowl. Ladle sauce over and around the fish. Divide the mussels among the bowls and sprinkle with chopped cilantro. Serve with crusty bread, such as a baguette.