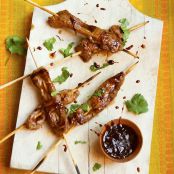 Prepare the Sauce: Make sauce by combining hoisin sauce, water, sesame-seed oil and sugar in small pan and stir to dissolve sugar. Bring to a boil then simmer for 3 minutes and cool.

Prepare the Mandarin Pancakes: Sift flour in mixing bowl; make a well in the center and add 3/4 cup of boiling water. Using a wooden spoon, gradually mix flour and water together until a soft dough is formed. Knead gently for 10 minutes on a lightly floured surface. Cover with damp towel and let rest for 15 minutes.

Roll dough to about 1/4-inch thickness. With a 2 1/2-inch cookie cutter (or glass) cut as many circles of dough as possible. Arrange circles side by side; brush half the circles lightly with sesame-seed oil and, sandwich-wise, place un-oiled circles on top. With a rolling pin, flatten each sandwiched pair into a 6-inch circle, rotating the sandwich an inch or so in a clockwise direction as you roll so the circle keeps its shape, and turning it once to roll both sides. Cover pancakes with a dry towel.

Set a heavy skillet on high heat for 30 seconds. Reduce heat to medium and cook pancakes, one at a time, in ungreased pan. Turn them over as they puff up and little bubbles appear on the surface. Regulate heat so pancakes become specked with brown after cooking about 1 minute on each side. As each pancake is finished, gently separate the halves and stack them. Serve at once or wrap in foil and refrigerate or freeze for later use. To reheat, steam for 10 minutes or warm (still wrapped in foil) in a preheated 350 degree oven for about 10 minutes.

Preparing the Duck/Goose: Wash the duck with cold water and pat dry inside and out. Suspend with a cord tied around loose neck skin (or under wings) in a cool airy place for 3 hours to dry the skin (train a fan on the bird to speed drying).

In a wok or large cassarole, combine water, honey, ginger root and cut scallions; bring to a boil over high heat. Holding the duck by the cord, lower it into the boiling liquid, using a spoon to turn the duck from side to side until thoroughly moistened. Remove the duck (discard liquid) and rehang in cool place to dry for 2 to 3 hours.

Traditionally, Crispy Duck is served as follows. Place platters of duck, heated pancakes, bowl of sauce, and scallion brushes on the table. Each guest spreads a pancake flat on a plate, dips a scallion in the sauce and brushes the pancake with it. The scallion is placed in the middle of the pancake with a piece of duck skin and a piece of meat on top. The pancake is folded over about 1 inch to enclose the filling, and the whole rolled into a cylinder that can be picked up and eaten with the fingers. 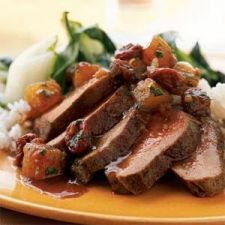